The most CRITICAL layup shot that was NEVER shown at The Masters! 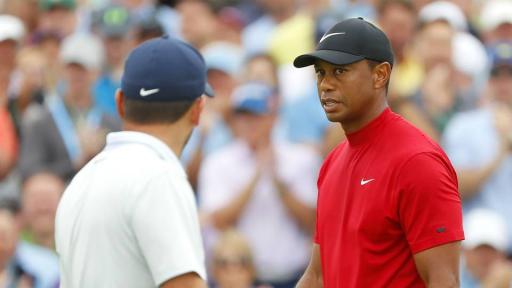 It may have only been a layup but it would ultimately cost Francesco Molinari his first Masters title and open the door for Tiger Woods - and incredibly, it was NEVER even shown by television broadcasters!

Molinari was in a tie for the lead with Woods standing on the par-5 15th, and after watching the American drill his drive down the middle to pile on the pressure, the Italian sent his ball into the pine straw well right of the fairway.

Broadcasters went for an ad break and returned to show Woods' second shot, but suprisingly NOT Molinari's crucial layup, which went a little awry.

Woods found the middle of the green with a stunning approach into the green from outside of 200 yards, while Molinari sent his second shot under the trees and to the left of the fairway in the first cut of rough, leaving him a delicate shot to a tight pin over water.

From there, Molinari was then shown by broacasters standing over his third shot from 79 yards under some tree branches. Stepping in to play the shot, the Italian caught a branch with his shot into the green and the ball dropped well short into the water.

It would lead to a tournament-ending double-bogey for Molinari, his second in the space of four holes, spoiling any chance he had of a first Masters title and second major in the last three following his Open Championship win last July.

Woods went on to two-putt for birdie to take a one-stroke lead before making a superb tap-in birdie at the par-3 16th to take a stranglehold of the tournament.

The 81-time PGA Tour winner even had the luxury of making a two-putt bogey at the last for a one-stroke victory over compatriots Brooks Koepka, Dustin Johnson and Xander Schauffele.

Molinari - who was bidding to become the first winner of The Masters as reigning Open champion since Woods in 2001 - would finish two strokes back in a tie for fifth.