Brooks Koepka has changed back to the TaylorMade M5 driver this week in Brookline, the same club he used to win the US PGA in 2019. 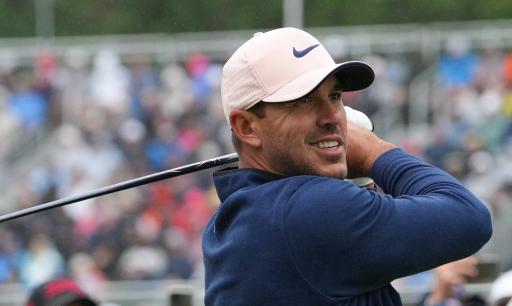 Brooks Koepka has made a controversial equipment change for the 2022 US Open, removing his Srixon ZX7 driver and Z-Star Diamond golf ball from his bag.

Koepka, a two-time US Open winner and four-time major champion, has swapped back to his old TaylorMade M5 driver and he has also opted for the Titleist Pro V1x golf ball.

This is a surprising change from Koepka who signed with Srixon last year. He hasn't been on his best form in 2022 with only two top-10 finishes and a Cleveland/Srixon spokesperson described their current relationship with Koepka.

"The characteristics are not a perfect fit, yet," the spokesperson told GOLF.com.

"In this early stage of our partnership, Brooks Koepka has validated the performance of the Srixon driver and golf ball. Though performance has been promising, the characteristics are not a perfect fit, yet.

"To work through this adjustment period most efficiently, we decided to focus our energy on fitting Brooks into the next generation Srixon driver and golf ball prototypes that will debut on tour in the near future - products developed with Brooks’ input and needs in mind.

"While we get this organized in the next couple of months, Srixon is temporarily allowing Brooks to use his previous driver and ball. Of course, he will continue playing Srixon irons and Cleveland Golf wedges.

"Both parties are fully committed to the partnership, and we are confident Brooks will be back in a Srixon driver and golf ball soon."

Koepka has averaged 311 yards off the tee this season and is ranked in the top 20 in driving distance, however, he is ranked 75th in strokes gained off the tee and 179th in driving accuracy percentage.

He had originally been a free agent for five years before signing with Srixon back in November. Koepka used to be a Nike staffer and he still wears Nike clothing.