Rory McIlroy explained that slow play caused a little bit of frustration before he smashed a bunker in anger with his golf club. 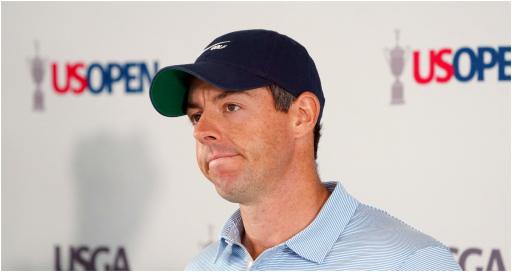 Rory McIlroy admitted that he was a little bit frustrated with the pace of play from the group in front during his first round of the US Open at Brookline before his outburst of anger.

McIlroy, 33, started well in Boston, Massachusetts after carding a solid opening round of 3-under par 67 at the third major of the year a week after winning his 21st PGA Tour title at RBC Canada.

The Northern Irishman was made to work hard at times to scramble for par, twice draining long putts on holes two and five as he made his way back to the clubhouse.

His round threatened to unravel on the fifth hole – his 14th of the day – at the short drivable par-4. McIlroy sent his tee shot into the thick rough directly next to a fairway trap.

He made a mess of the sand trying to find a comfortable stance but when he did make contact, he probably wished he could’ve had a mulligan after dumping it into the bunker straight in front of him.

McIlroy admitted: “Yeah, I think one of the things over the years that I maybe haven't done as well at U.S. Opens is when I've put myself in those sort of positions, like in that long rough on two or where I've found myself on five, trying to be a little too heroic with the first shot and leaving it in there or just sort of completely getting it wrong, and then all of a sudden you're scrambling to make a double.”

When asked about his frustrations, McIlroy said: “Yeah, the guys in front of us were playing so slow.

“They were like a hole or hole and a half behind the group in front of them. So yeah, that was a little frustrating, too.”

The group in front were the American duo of Scott Stallings and Davis Riley alongside Frenchman Victor Perez.

Just how difficult was the shot on five?

McIlroy said: “Yeah, I feel -- again, you're going to encounter things at a U.S. Open, whether they be lies or stuff like that, that you just don't really encounter any other week.

“It's hard not to get frustrated because I'm walking up there going like, just come back into the bunker. The thickest rough on the course is around the edges of the bunkers.

“So, I was sort of cursing the USGA whenever I was going up to the ball, and then yeah, but it's one of those things it happens here, it doesn't really happen anywhere else.

“You just have to accept it. I gave the sand a couple of whacks because I'd already messed it up so it wasn't like it was much more work for Harry, and then I just reset and played a decent bunker shot, and then it was really nice to hole that putt.

“But yeah, you're going to encounter things this week that you don't usually come across the other weeks of the year, and you just have to try to accept them as best you can.”

More: Rory McIlroy rages in the bunker at US Open

McIlroy admitted that it was nice to be contention right at the start of the week compared to having to chase down the leaders over the weekend.

Although he admitted the fine margins in this typically difficult setup mean that at times players are going to react in frustration.

When asked about if it was okay once in a while to show competitive anger, McIlroy said: “Yeah, of course. Almost to remind yourself sometimes how much it means to you, as well.

“Again, some of these reactions that maybe you saw out there today, whether it be hitting the sand on 5 or the club throw on 9, you just have to be so precise and so exact at this golf tournament maybe compared to some others that any little thing that doesn't quite go right, you're sort of putting yourself behind the 8-ball.

“The margins are just so fine in this tournament, and I think you can sort of see that out there with some of the reactions.”

Next page: Phil Mickelson hits shot "down Boris Johnson's hair" at US Open