The USGA CEO Mike Whan has offered his opinion on what the fallout could be for the LIV Golf players ahead of the US Open. 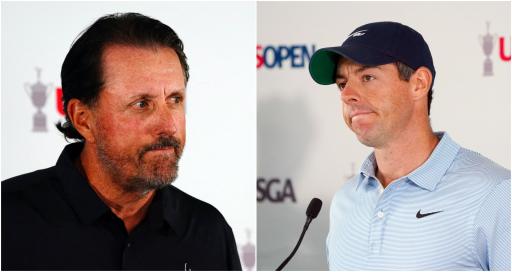 The chief executive of the USGA, Mike Whan, has offered his opinion on what the potential fallout could be from the Saudi-backed LIV Golf Invitational Series ahead of the US Open.

One of the biggest questions facing LIV Golf right now is how the majors will respond to their controversial new league.

So far this week the players have offered their strong opinions on the subject. Shane Lowry is "sick" to the back teeth of it. Likewise Brooks Koepka.

Rory McIlroy again twisted the knife by saying the players who had opted to leave the PGA Tour have "made their bed".

Jon Rahm, on the other hand, offered one of the most detailed answers we have seen so far. This was despite Rahm saying at the Genesis Invitational that he would only talk about the subject once.

The R&A have so far remained silent about future qualifying into The Open. Augusta National chairman Fred Ridley offered a non-answer answer by saying The Masters will always do what is best for the game of golf.

The PGA of America has also adopted a stance of seeing how things will play out.

Whan was asked if he could see a day when the breakaway players could find themselves in a situation where it is "harder and harder" to get into the US Open.

He added: "Well, first off, I just answered the question is could I foresee a day? Yeah, I could foresee a day. Do I know what that day looks like? No, I don't.

"But the question was, could you envision a day where it would be harder for some folks doing different things to get into a U.S. Open? I could. Will that be true? I don't know, but I can definitely foresee that day."

Last week the USGA released a statement confirming the LIV Golf players would be allowed to play in the major.

But he admitted that the qualifying criteria could change.

He said: "I think it would be a lot of hypotheticals for me to get what LIV is going to be by the time we're talking about this next year, but as we would do any year, we're going to definitely reevaluate field criteria. We would any year. We will take a look at what the landscape looks like.

"I didn't mean to send some sort of tremor that everything is going to change tomorrow, but when asked the question, could you foresee, of course I could foresee. What exactly that may or may not look like will depend on what happens to the landscape."

Next page: Rory McIlroy takes a tumble in practice ahead of the US Open