"Awful, I did nothing" Tiger Woods "stronger" after post-Masters misery

Tiger Woods provides un update about how he feels ahead of the PGA Championship at Southern Hills. 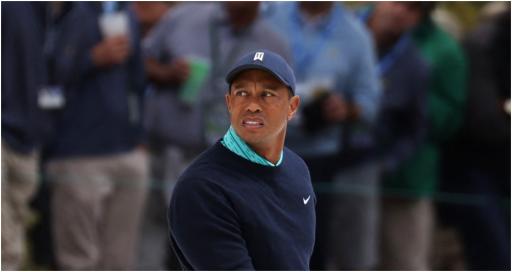 "Oh hell yeah!" These were the words Tiger Woods reportedly used when asked if he feels a lot stronger ahead of the PGA Championship.

Woods has arrived in Tulsa, Oklahoma and has already played a practice round at Southern Hills ahead of the second major of the year.

When Woods, 46, finished his final round at the 86th Masters last month it seemed improbable that he would play this week.

He visibly struggled on the hilly terrain at Augusta National and was seen wincing a lot as he dragged his right leg around.

And this week he has revealed the true extent of just how bad he was feeling when he woke up on the Monday after.

"That Monday was awful, I did nothing", Woods told Golfweek after he completed his first practice round yesterday.

"But Tuesday was leg day. So we went right back after it. Everything is better. I've gotten a lot stronger since the Masters."

Woods added: "It's only [his right leg] going to keep getting stronger. The more I use it, the more strength it gains.

"Am I ever going to have full mobility? No. Never again. But I’ll be able to get stronger. It's going to ache, but that's the way it's going to be.

"I'm excited about this week. I'm not going to play that much going forward so any time I do play, it's going to be fun to play and to compete.

"There are only so many money games you can play at home."

His caddie, Joe LaCava, also told the publication: "Other than the fact that he won here in 2007, I think it's the stamina and endurance thing that excites him the most.

"One hundred per cent I see him stronger. I just think the endurance is there now. I don't think he's getting quite as tired as quickly."

Woods visited Southern Hills several weeks ago. Their head pro described the scene as if "The Beatles" were visiting such was the fanfare.

They tried to keep his scouting mission a secret but no sooner had Woods' private jet touched down there were fans flocking to the course to catch a glimpse of the big cat.

A helicopter hovered above filming Woods as he marched around.

His latest comments will no doubt delight his fans and add credibility to Woods' hopes that he can win again.

The Masters was no last hurrah. It was no farewell. The fat lady isn't singing. Not just yet.