Rickie Fowler spoke to the media about the Saudi-backed rebel league ahead of the PGA Championship. 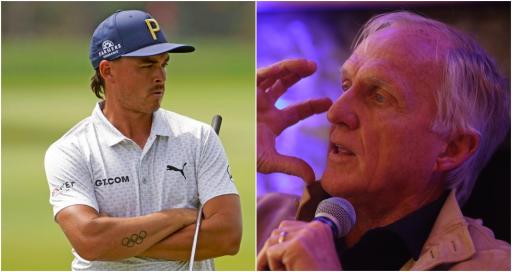 Rickie Fowler has been in such a poor stretch of form over the last few years his name and the word "struggles" are almost synonymous.

So much so, the player who was once ranked as high as fourth in the world has tumbled all the way down to the current World No. 146.

If you listen to him in recent interviews, he says all the right things. It's not too far away, he'll tell you. I've been working hard, he'll add.

He might even go as far as saying that he's only a few unlucky putts away from seriously contending in a PGA Tour event.

Privately, he may feel differently. Now the former Players champion is 33 years old and is a father. He's also been quoted as saying there is more to life than golf.

That is true, of course, though his recent comments on the Saudi-backed rebel league fronted by LIV Golf Investments suggest he has a bit of a conundrum.

For context, Fowler still believes the PGA Tour is currently the best place to play his golf. Though he could be persuaded otherwise, it appears.

Fowler spoke to the media ahead of this week's PGA Championship at Southern Hills in Oklahoma. It is a tournament he only got into after finishing in the top-10 last year at Kiawah Island.

Before that, he got into the last PGA Championship by virtue of an exemption. "Yeah, I have", Fowler told reporters when asked if he was approached by Greg Norman and LIV Golf.

He added: "To be straightforward with you guys, I haven't necessarily made a decision one way or the other.

"I've mentioned in the past, do I currently think that the PGA Tour is the best place to play? I do. Do I think it can be better? Yes."

He added: "So I think it's an interesting position. Obviously there's the LIV and Premier [Golf League], as well.

"These tours or leagues or whatever—however you want to classify or call them—they wouldn't really be coming up if they didn't see that there was more opportunity out there.

"I've always looked at competition being a good thing. It's the driving force of our game.

"You know, being able to have games with guys at home, that's how I always grew up is competing.

“So it's interesting, that's for sure."

Fowler was asked about the possible consequences of playing in the first LIV Golf event in England in just over three weeks' time.

He said: "I don't know, I'm like trying to learn as much as I can. I have no commitment one way or another.

"Obviously the statement came out last week that they [the PGA Tour] weren't granting any releases.

"I think a lot of people thought that the first one being out of the country may not be an issue.

"Obviously it would be more so once it came into the U.S. I'm sure there will be some sort of consequences but I really don't know at this time."

Fowler added that he thinks players want more clarity over the legality of any possible consequence for punishments from the PGA Tour.

There has been talk of outright bans, suspensions or even fines.

It has been widely suggested that over the next few years we will see the PGA Tour and LIV Golf Investments in an anti-trust lawsuit.

Fowler said: "I think guys would probably like to know.

"Because if you're trying to make a decision one way or the other, I know there's some guys that are probably in a position where the consequence may not matter.

"They may just be ready to go play and not look back type of thing and see how things come full circle.

"Like I said, it's an interesting time. I've always thought that competition is a good thing, and these leagues or tours wouldn't be coming up or popping up if they didn't see kind of those opportunities out there."

Fowler's comments, in my view, are interesting as he appears to be the first player under the age of 35 to break ranks and admit he is seriously weighing up his options.

Notable younger players who have pledged their allegiance to the PGA Tour include Jon Rahm, Justin Thomas, Collin Morikawa and Rory McIlroy.

Fowler is making his 13th PGA Championship appearance this week.

So far this season, his best finish came when he finished third at the CJ Cup at Summit in Las Vegas where McIlroy claimed his 20th PGA Tour title.

He has missed eight cuts and is scheduled to participate in a qualifier for the U.S. Open. He did not qualify for the Masters.