Bryson DeChambeau appears ready to return to the game to compete in the second men's major of the year. 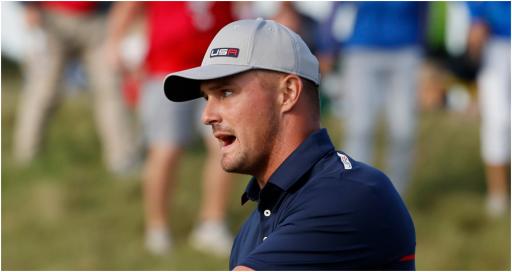 When Bryson DeChambeau went under the knife after the 86th Masters, we were informed that we wouldn't see the big-hitter for quite some time.

DeChambeau said that he hoped to return to the game around two months - give or take - after surgery. It was predicted that his appearances at the PGA Championship and the U.S. Open were doubtful.

There were some reports that the type of surgery he had - to repair the damage to the hamate bone in his left wrist - take approximately 8-12 weeks to fully recover.

Over the last few weeks, DeChambeau has shared images of the progress his hand has made. He got the nod to begin chipping not so long ago.

Just 12 days ago, DeChambeau shared rather unpleasant image of his hand still looking like a bit of a mess.

Now, the 28-year-old, to all intents and purposes, appears ready to tackle Southern Hills for the second men's major of the year in Oklahoma.

DeChambeau has shared another update. This time, he is ripping a driver in his back garden. It's exactly one month and two days after going under the knife.

4 weeks and 2 days since surgery. pic.twitter.com/shymowoCBU

He has not officially committed to the tournament but he remains in the field and can be found at odds of 65-1 to claim his second major.

After he smashes the drive, the stats reveal that he is hitting 192mph ball speed and carrying the ball 342 yards.

That doesn't exactly look like someone who won't be playing in Tulsa this week.

According to Todd Lewis from the Golf Channel, DeChambeau plans to fly to Tulsa today (16 April) to play a practice round.

Much like Tiger Woods, barring any last-minute issues, DeChambeau plans to play the U.S. PGA.