Andy Sullivan was on fire during the opening round of the Golf in Dubai Championship. 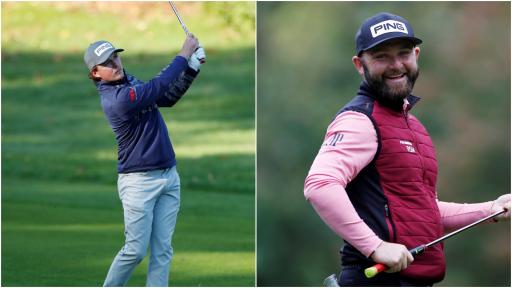 Eddie Pepperell called his friend Andy Sullivan a "demoralising bully" on Wednesday following the opening round of the Golf in Dubai Championship.

With two European Tour events on this week, the action at the Jumeirah Golf Estates started a day earlier than we are used to seeing the players in action and Sullivan equalled the lowest round of his career on the Fire Course.

RELATED: The BEST BETS for the PGA Tour's Mayakoba Golf Classic this week...

Sullivan shot an 11-under par opening round of 61 where he made 11 birdies and not a single bogey as he took a two-shot lead, while he is currently under par again for Thursday's second round.

Fellow Englishman Pepperell hasn't played a lot of golf recently so was probably fairly pleased to walk off the 18th 3-under par yesterday, but seeing Sullivan's double-digit low score must have made him feel a little differently.

Pepperell is known for his Twitter antics and it didn't take him long to crack a joke about his good friend Sullivan, labelling him a "demoralising bully".

I know people say @andysulligolf is a nice guy and all that but it’s not true. He’s a demoralising bully.

Sullivan then replied to the tweet, saying: "Don't be like that Ed, I missed a few coming in."

Don’t be like that Ed I missed a few coming in.

Starting his opening round on the 10th hole, Sullivan birdied two of his first five holes, before making four consecutive birdies to reach the turn a 6-under par.

The 34-year-old, who has found a new lease of life on the European Tour in recent months, continued his hot streak on the back nine with birdies at 1 and 2, before adding three more birdies to the scorecard and closing with two pars.