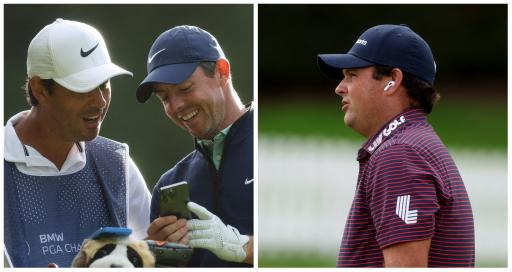 Rumours began to circulate earlier in the week the pair had been involved in a tense exchange on the range at Emirates Golf Club before the Dubai Desert Classic on the DP World Tour.

McIlroy later said what it was all "a storm in a teacup" and that nothing really happened.

Although the Northern Irishman explained the reality of the situation was that he simply didn't even want to acknowledge the LIV Golf player.

McIlroy, 33, told reporters on Wednesday before teeing it up for the first time in 2023 that he was delivered a subpoena by Reed's legal team on Christmas Eve.

Why, exactly, would McIlroy want to shake hands with a man who is suing him?

For his part, Reed accused the four-time major champion of behaving petulantly like a child.

"He saw me and he decided not to not to react. It's unfortunate because we've always had a good relationship."

You can watch the footage of the exchange below, it was captured by TenGolf.

Reed walks over to McIlroy and shakes the hand of his caddie Harry Diamond before appearing to say something to the Ulsterman.

When McIlroy continues to tinker with his TrackMan, Reed pauses then flicks a golf tee in his direction.

It has now emerged that the golf tee was emblazoned with the 4 Aces GC logo.

The 4 Aces GC is the all-American LIV Golf League side Reed plays for alongside Dustin Johnson, Talor Gooch and Pat Perez.

Next page: "I can see why Rory McIlroy is frustrated"