REVEALED! Rory McIlroy shows what Sergio Garcia sent him about LIV Golf at the US Open, following interview with Irish Independent. 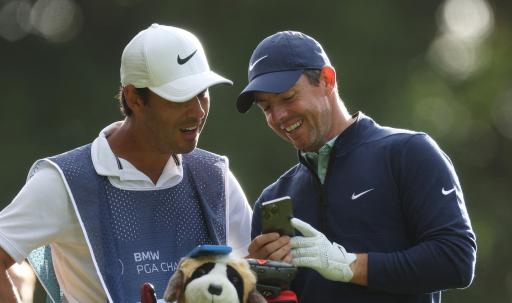 Rory McIlroy has revealed he woke up to a text message from Sergio Garcia telling him to "shut up about LIV Golf" during the 2022 US Open, following an interview with Irish Independent.

McIlroy, 33, and Garcia, 42, have been close friends down the years following their careers on the PGA Tour, DP World Tour and of course together at the Ryder Cup where they have a 2-0-2 (W-L-H) record.

The World No.1 was even a groomsman at Garcia's wedding in 2017. Garcia also attended McIlroy's wedding in the same year.

But their relationship has rapidly deteriorated this year as a result of Garcia joining LIV Golf.

RELATED: WHY RORY MCILROY WANTED TO BE A "PAIN IN THE A**E" OF GREG NORMAN AS MUCH AS POSSIBLE

McIlroy reportedly said he was not aware that Garcia was joining the Saudi-bankrolled circuit until he said to him on the practice range at the Wells Fargo Championship in May that he had a new plane and could offer him a ride to the first LIV Golf event at Centurion Club in England.

Many of you will remember that was also the week of Garcia's famous rant to an official about him wanting to leave the PGA Tour.

Garcia went to LIV Golf, and of course McIlroy turned down a huge offer from LIV to remain on the PGA Tour.

McIlroy is now the lead ambassador for all things PGA Tour as they go toe-to-toe with LIV Golf.

Earlier this week, McIlroy and Woods hosted another emergency meeting ahead of the new LIV Golf League starting up in 2023.

McIlroy, who describes his golfing idols as Tiger Woods and also Garcia, explained to Irish Independent how he woke up to a text message from the Spaniard on the Friday of this year's US Open telling him to "shut up about LIV".

The US Open fell a week after McIlroy had won the Canadian Open, and fired shots at LIV Golf CEO Greg Norman.

"I was pretty offended and sent him back a couple of daggers and that was it."

It's probably fair to say there will not be any Christmas cards exchanged between McIlroy and Garcia this month.

McIlroy also told the publication this week how he wanted to be "as much of a pain in the a**e" of Norman as possible.