Rory McIlroy has been described as an "immature little child" by Patrick Reed after the Northern Irishman snubbed the LIV Golf player. 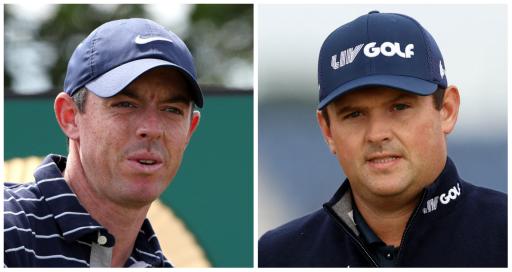 McIlroy, 33, decided to ignore Reed on the range at the Emirates Golf Club before the Hero Dubai Desert Classic.

It resulted in Reed flicking a tee in McIlroy's direction after the short exchange that the Northern Irishman has described as a "storm in a teacup".

That being said, McIlroy said he just didn't want to acknowledge Captain America after revealing a subpoena was delivered from Reed's legal team on Christmas Eve.

Related: Rory McIlroy did not like this question about Sergio Garcia

Reed has now given his version of events and he revealed the tee that he flicked towards McIlroy was emblazoned with the 4 Aces GC logo.

The 4 Aces GC is the all-American side Reed plays for in the LIV Golf League alongside Dustin Johnson, Pat Perez and Talor Gooch.

Reed said he thought it was funny how a little flick of a golf tee turned into the American "stabbing him".

Then he described the four-time major champion as an immature child.

"Because of the relationship I've had with Rory - let's be honest, we've had some great battles at Augusta and other tournaments and our friendships been pretty good up until obviously joining LIV – I walked over there and wished Harry [Diamond, McIlroy's caddie] Happy New Year and then Rory because it is the first time I have seen them.
"Harry shook my hand and Rory just looked down there and was messing with his Trackman and kind of decided to ignore us. We all know where it came from – being part of LIV.
"Since my tees are Team Aces LIV tees I flicked him one. It was kind of a funny shot back. [It's] funny how a small little flick has turned into basically me stabbing him and throwing a tee at him.

"He saw me and he decided not to not to react.
"It's unfortunate because we've always had a good relationship.
"But it is one of those things – if you're going to act like an immature little child then you might as well be treated like one."

Reed is not paired with McIlroy this week. The American has been drawn with Gavin Green and Scott Jamieson while McIlroy is teeing it up with Tommy Fleetwood and Ryan Fox.

Still, Reed would relish the chance of playing with McIlroy.

"That would be great. I will tell you this much, there probably won't be much talking. Even if I said hello on the first he won't say anything. I can just be respectful and as much as a gentleman as I can be. His choice if he doesn't respond."

What did Rory McIlroy say about the exchange?

"I didn't see it. I was down by my bag and he came up to me, and I was busy working and sort of doing my practise, and I didn't really feel like -- I didn't feel the need to acknowledge him.
"So I didn't see a tee coming my direction at all, but apparently that's what happened. And if roles were reversed and I'd have of thrown that tee at him, I'd be expecting him a lawsuit."