Rory McIlroy: "I've never been so glad to get off the golf course"

Rory McIlroy made a brilliant birdie up 18 at Yas Links at the HSBC Abu Dhabi Championship to finish on the cut line. 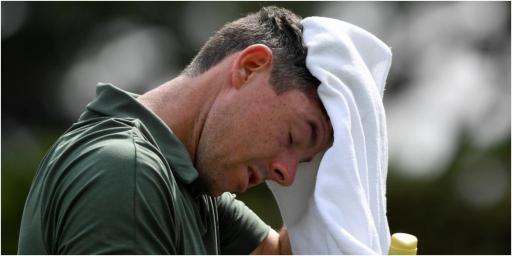 Rory McIlroy sounded like he was in Star Wars at the end of his round yesterday: "Help me Obi Wan wind, you're my only hope".

And McIlroy was helped by the conditions as the field came back to him on day two of HSBC Abu Dhabi Championship.

The only problem was he went the other way in some of the worst conditions we have ever seen on the DP World Tour.

The Northern Irishman, 32, finished on the cut line by the skin of his teeth after making birdie up the final hole to finish at 3-over thru 36.

It was an interesting round that saw him six make bogeys, one birdie and a solitary eagle.

"I've never been so glad to get off the golf course," he could be heard saying as he trunched off the 18th green.

Ian Poulter was decking drivers from 238 yards into a 30mph wind.

Play was suspended to blow sand back off the greens. Everyone looked fed up.

Tyrrell Hatton sent one putt woefully short and used his putter to resemble a gun. Absolutely fed up.

Poulter makes up the top five after shooting an impressive level par round having had one of the earlier tee times.

Shane Lowry is also in the mix, as is the impressive Japanese youngster Takumi Kanaya who finds himself on the same score at 5-under.

Collin Morikawa also finished at 3-over par to make the weekend.

By day's end, it was familiar face Viktor Hovland who stayed in the mix, shooting two strokes over the par-72 layout at Yas Links.

Hovland is at 6-under through 36 holes and trails Scott Jamieson by one stroke who - like Hovland - shot 2-over for his second round.

Jamieson raced to an early lead and held on to keep himself at the top of the leaderboard going into the weekend.

Related: Rory McIlroy sees the funny side of awful conditions