Rory McIlroy saw the funny side of the dreadful conditions at the HSBC Abu Dhabi Championship, which saw Ian Poulter decking a driver from 238 yards into a 30mph headwind. 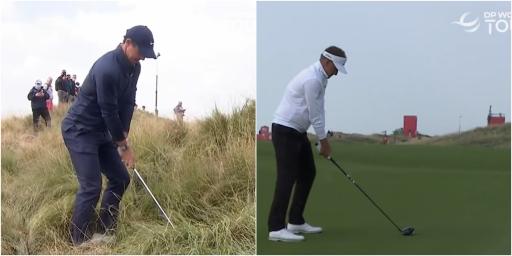 Rory McIlroy and the rest of the DP World Tour were warned this was going to happen at the HSBC Abu Dhabi Championship.

The winds were predicted to get up and make scoring pretty much impossible.  A prediction that sadly has come true.

McIlroy failed to take advantage of the good scoring conditions on day one of the first Rolex Series event of 2022.

And he was up against it early on day two when he had to scramble to save par on his first hole of the day.

ShotTracer informs us that McIlroy sent his first tee shot into the fairway bunker at the 378-yard par-4 first at Yas Links.

He managed to find the green and save a par with a tricky little putt as the wind blew an absolute gale.

At least, McIlroy saw the funny side of it. He walks off the green, whistling a happy tune.

Too right, these conditions are awful.

McIlroy also went on adventure on his next hole, sending his tee shot out left and the next one in the same direction.

He then produced a little bit of McIlroy magic:

Some Rory magic from the rough

Birdie putt slips by, but a very eventful par at the second. #ADGolfChamps | #RolexSeries pic.twitter.com/wa1LO9PTmw

To put it into context just how tough the wind is, with gusts of up to 30mph, Ian Poulter hit a driver off the deck from 228 yards.

Better them than us.

Still, who hit the best driver off the deck this week. Phil Mickelson or Ian Poulter?