Callaway Rogue ST Pro vs TaylorMade P790 Irons | Which Irons Are Right For YOU?

Alex from GolfMagic compared the Callaway Rogue ST Pro irons to the TaylorMade P790 irons and considered their price, feel and durability. 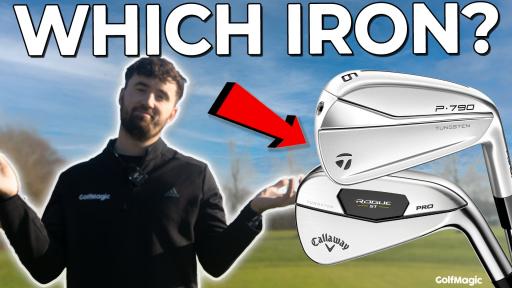 Alex from GolfMagic wanted to answer a question: are the new Callaway Rogue ST Pro irons better than the TaylorMade P790's, the best iron of 2021?

The TaylorMade P790's of 2021 were the third iteration of the family and in terms of price, they cost £1149.00 which could be a handy investment.

Their new design is similar to the P770 irons. They look like a blade and try to perform like a blade, but they are far more forgiving than this.

They have very strong lofts which also help to deliver distance and high ball speeds too. Alex found the ball flight to be pleasing when first hitting them in 2021 too.

The Callaway Rogue ST Pro irons have the same lofts as the TaylorMade irons with the 7-iron being 30.5 degrees. They are aesthetically pleasing and have a similar design to the P790's.

A key part of the debate is durability which is where you might side with the TaylorMade irons. They are a sturdy and well-designed club, whereas the Callaway Rogue irons are annually renewed and not specifically built for durability.

The Callaway irons have a glossy finish which could pick up some knocks over the next 12 months and this could be a reason why they are cheaper at £949.00.

When Alex took them both to the studio at Silvermere Golf Club, each club produced similar distances which were expected, but the TaylorMade irons achieved a higher apex of 127 feet, compared to 116 feet from the Callaway clubs.

The feel with the P790 irons has been improved in this third iteration, whereas they used to feel hot off the face which resulted in inconsistent distance dispersion.

Both produce fantastic ball flights but the Callaway irons arguably don't produce as much feedback with off-centre hits as the P790's.

However, at £200 cheaper, the Rogue ST Pro irons would be very hard to turn down and they would still be a very sound investment.

Next Page: Hideki Matsuyama forced out of Players Championship on PGA Tour