FootJoy have extended their modern classic look with new Premiere Series. Find out about colours, prices and specifications here. 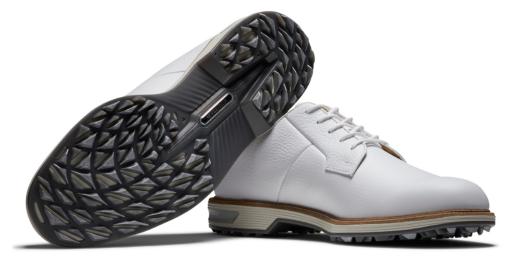 FootJoy, one of the leading footwear brands in golf, have released their latest line with their new Premiere Series.

Named after one of the brand's founders, Fred Field, the footwear company say this latest launch honours its heritage while championing contemporary performance.

The all-new spikeless offering is described by the brand as a modern classic design which complements the same three Premiere Series models launched last year.

Such was the popularity of the shoe, the Premiere Series went on to become the number one shoes at each of the four major championships last year.

The brand say that the Premiere Series is "timeless in design". This latest line features the VersaTrax+ spikeless outsole.

That is a anti-channeling trend pattern is engineered to provide grip for any lie or angle, provoding total traction coverage and reducing any slippage.

It uses TPU compounds to grip any surface - a harder TPU for on-course grip and a softer TPU for traction on harder surfaces.

They launched on 20 January.