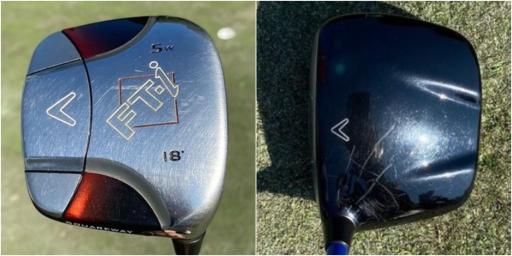 When you think of European Tour players you tend to think they have the latest equipment.

But not Spain's Eduardo de la Riva who was pictured using this retro Callaway FT i-Squareway 5-wood at the Mallorca Golf Open.

He turned professional in 2001 and has claimed one victory on the Challenge Tour.

The Spaniard only plays a handful of European Tour events when he qualifies.

A picture on the Instagram page sms_on_tour captured the retro club and you can see in detail the scratch marks on the crown of the club.

Just look at that in all its glory.

You can still pick up the club for cheap.

Just last week I was playing a round at my local club when a friend of mine whipped out this after they found one in their garage.

They were adamant it was going in the bag permanently as they found every fairway in regulation in our evening nine holes as the sun set.

Golf fans reacted with a mixture of surprise and astonishment the Spanish pro had the club in his bag.

"Why would anyone still play this club, it's awful"

NEXT PAGE: PAIGE SPIRANAC HAS A MESSAGE FOR THE HATERS