Have you ever been as unlucky as Robert MacIntyre was yesterday?

Robert MacIntyre almost made a hole-in-one on the par-3 7th hole at The Belfry on Saturday, but his ball finished off the green. 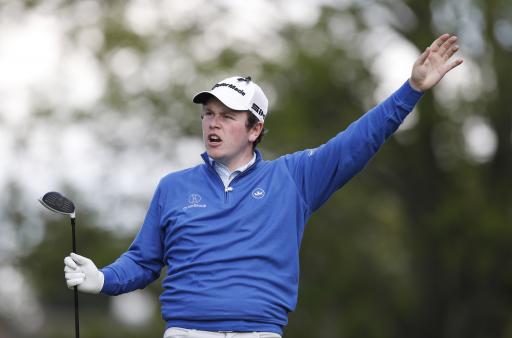 Robert MacIntyre enjoyed a solid week at the Betfred British Masters as, although he didn't win, he finished in a tie for eighth on 10-under-par.

But things could have been so much better for the Scotsman if his tee shot on the par-3 7th hole had a touch more luck and dropped into the hole.

MacIntyre made a pinpoint stroke on the 177-yard hole that saw the ball drop and hit the bottom of the pin, but unfortunately for the 24-year-old, his ball bounced back off the green.

When the ball was in the air, MacIntyre must have thought it was going close but he couldn't have imagined his ball clattering against the pin and rebounding into the rough.

Golf can be cruel

It looked as though things could get worse as his ball came away from the green and towards the water hazard on this par-3, but it stopped short which allowed MacIntyre to salvage a par.

"This is where the R&A needs to find a new rule... needs to be more fair and not stay old school and say « that’s golf »", one fan said.

"To be fair he didn't carry it far enough... Should never be aiming to land it that close to the front of the green.." another fan said.

"Fantastic save though!!! Got some resistance that lad gonna be their come back 9," one fan commented.

"If that bank was closely mown would've been even more cruel," another can commented.

The impressive young golfer has one win to his name on the European Tour when he was victorious at the Aphrodite Hills Cyprus Showdown in November.