The British players endured testing times on day three of the Mallorca Golf Open on the European Tour. 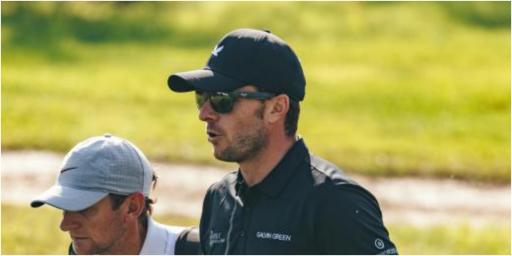 Laurie Canter is still searching for his first win on the European Tour and he struggled to get anything going on Saturday.

He flirted with finishing strongly and found a birdie at 17 but dropped one at 18 and closed out with a level-par 70 to finish on 6-under par.

Canter is trying to chase down Winther who has the clubhouse lead at 15-under and holds a two-stroke advantage on Spain's Jorge Campillo.

RELATED: FAN "GIVES IT LARGE" AFTER KAYMER HOLES OUT FOR BIRDIE

Winther, 33, shot a stunning, bogey-free 62 which included five birdies on the back nine.

Three of those birdies came from the 16th onwards.

Campillo (13-under), Sebastian Soderberg (12-under) are also in the hunt alongside Alvaro Quiros (12-under).

Andrew Johnston signed for an impressive opening round of 66 at the Golf Santa Ponsa.

RELATED: MANSELL HITS THE SHOT OF HIS LIFE AT MALLORCA OPEN

He followed that with a 71 and sits at 6-under through 54 holes after he shot a 67 on day three and is some way off the lead.

As is England's Jack Senior who finds himself inside the top-10.

If Winther were to win it would be his first ever victory on the European Tour.

"He's got it closer than most players have with a wedge" @JeffWinther is the first to reach 13 under and takes the solo lead.#MallorcaGolfOpen pic.twitter.com/UfwBDbvFBo

The field may be missing some big players but the tournament has provided some fantastic entertainment.

Canter got his glove signed by Thomas Pieters and then proceeded to go low on day two.

Martin Kaymer chipped in and then a fan reacted hilariously by giving a double thumbs up to the camera.

Richard Mansell hit the recovery shot of his life when he chipped over a path, under a tree, into the rough and judged it perfectly into the hole.

RELATED: GOLF FANS REACT ON INSTAGRAM TO THIS PAINFUL SHOT

RELATED: PADDY SAYS RORY MCILROY TRIED TO TAKE TOO MUCH ON

NEXT PAGE: DJ AMONG ELITE EIGHT WHO WANT TO PLAY IN SAUDI ARABIA