Is Bryson DeChambeau's latest injury scare telling him something?

Bryson DeChambeau has been struggling with hip and wrist injuries lately. Is his body telling him to finally slow down? 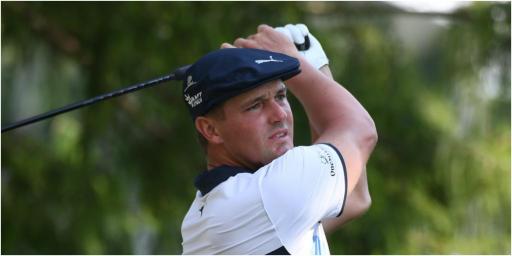 Bryson DeChambeau has vowed to come back soon but what we have heard about his injuries is slightly concerning.

DeChambeau burst onto the PGA Tour in 2016 and his trevails in pursuit of speed and tinkering with equipment have been well-documented.

First they called him The Scientist after it emerged his coach was spraying his golf balls with water on the practise range back in 2018.

DeChambeau was working with Bridgestone to work out how the water affected the spin rates of his wedges.

There were of course other things DeChambeau was working on - with his putting, with his technique - that gave him the moniker.

He had also reportedly grown up soaking his golf balls in Epsom salt to determine the center of gravity. Pretty unusual, to say the least.

"He's looking to eliminate as many variables as possible," Adam Rehberg, from Bridgestone, told curious reporters at East Lake.

"In this case, he wanted to know how much water would affect not only spin rate and any potential hydroplaning but ball flight as well."

Understand that? Me neither. But there is no denying DeChambeau is one smart cookie. Fast-forward to the present day? It's a bit different.

Of course, DeChambeau probably (definitely?) still has the science in his mind, but he also appears happy to try and just leather it.

Instagram videos of his training sessions, drenched in sweat, yelling, screaming, hyping up himself up with long drive king Kyle Berkshire have surfaced.

He's pushing his body, for sure, but is he pushing it to the limit? Only he will know. He tells us he isn't, and that he will be back.

DeChambeau informed us on Instagram that the injury that caused him to withdraw from the Saudi International was the result of a fall.

His critics and naysayers suggest this was interesting timing considering he looked in agony only a week earlier at Torrey Pines.

DeChambeau, at one point during his second round trying to make the cut, reminded us of that famous Tiger Woods moment.

Not as dramatic as the cat - who fell to his knees and used his club as a cane to pry himself back up - but DeChambeau wasn't a happy bunny.

"That feels so good on my wrist," he said sarcastically to his caddie after hacking one shot out of the cabbage.

More: Rory or Bryson? Who has the best driver swing?

He soldiered on, of course, because it's always entertaining with DeChambeau. He's a determined young soul, is the American.

He also provided an hilarious exchange with a marshall, then holed out from a bunker before (presumably) going to see his physio.

DeChambeau's withdrawal from Jeddah would barely have got noticed had he not pulled out of the Sony Open a few weeks earlier.

That wrist was giving him trouble. His YouTube content showed us a behind-the-scenes look into what his physio helps him with.

One thing that stands out, at least in my mind, is the sheer effort DeChambeau has to put in just to maintain his physical condition.

And yet Bryson is always pushing, it seems, for more. You have to respect it, but at the same time be concerned for his future health.

In 2018, according to the PGA Tour official website, he averaged just a tiny bit north of 302 yards with his driver.

Last year, he was up to 323.6 yards. A remarkable improvement for someone who has managed to keep it on the planet and win tournaments.

Of course there are other players - both amateur and professional - who can hit it just as far or even farther.

But it was during this period that he claimed his first major at Winged Foot at the 2020 U.S. Open. Admirable to say the least.

Now DeChambeau, he tells us on his social channels, wants to cruise along on the PGA Tour with an average ball speed of 200mph.

But at what price?