Has the Player Impact Program been a success? Which PGA Tour stars will profit?

Brooks Koepka and Bryson DeChambeau are likely to be two of the biggest "needle-pushers" on the PGA Tour and are set to be part of the $40 million prize pool. 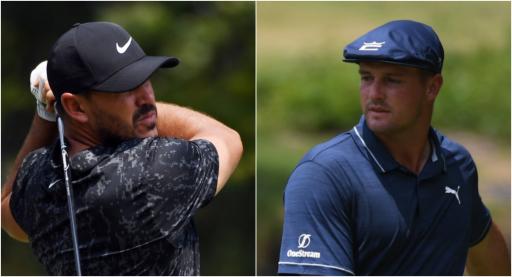 When the Player Impact Program was announced in April, it certainly raised a few eyebrows and turned a few heads because we had never seen anything like it in the sport.

It was announced that the PGA Tour will raise a $40 million prize fund to reward 10 players based on non-playing criteria such as Nielsen Brand Exposure rating, Google search appearances and the use of the MVP Index which measures the players' engagement on social media channels.

The program received criticism from some fans who claimed that it will just reward the top players on the PGA Tour who already earn enough money through their golfing ability.

The program was also seen as a reaction to the Saudi-backed Premier Golf League which attempted to lure the world's best golfers into a new format of the game.

Last month, tour player Grayson Murray claimed that he didn't receive any help from the PGA Tour when he was dealing with alcohol problems and he accused the organisation of ignoring him and 'pouring money into the top 10 players.'

I feel that the Player Impact Program could be reminiscent of Murray's words. The best players are likely to have the most social media followers and the most lucrative sponsorship deals, so, therefore, they have the best chance of being part of the $40 million prize pool.

As we see every year on the PGA Tour, there are many different stories and controversies that arise but two topics that have dominated this season are the Brooks and Bryson feud and Tiger Woods' road to recovery after his car accident in February.

I would be very surprised if these three golfers were not competing for the top prize of $8 million at the end of the season, but is there an urgent need to reward players for non-golfing factors?

Some golf fans have claimed that Koepka and DeChambeau have deliberately dragged out their spat to increase their social media engagement and coverage.

To be fair, this is not exactly a wild assumption as we are in the inaugural year of the program and there is a lot of money to be earned.

In my opinion, I do not think it can be a success because it will never gain the full backing of golf fans and without fans, the sport is essentially nothing.

It would be great to see players, who are not always found in the spotlight, build a good fanbase and earn money from the program but it is hard to see how this is possible.

We are yet to see the results of the program and we are yet to see who the top 10 players are, but in my view, a scheme that rewards golfers on social media interaction and brand exposure is a bizarre concept.

NEXT PAGE: "I JUST WANTED TO STAY IN BED": MATTHEW WOLFF OPENS UP ON MENTAL HEALTH ISSUES