Boris Johnson confirms golf courses will NOT reopen during lockdown

Johnson reveals there is "no intention" for golf courses to remain open during England's Covid lockdown... 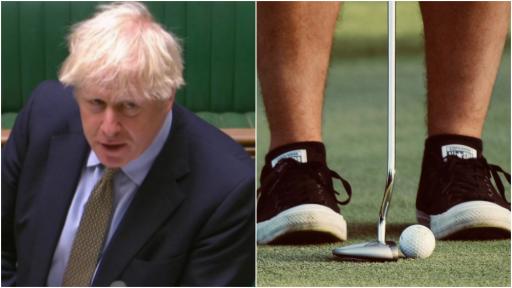 UK Prime Minister Boris Johnson has revealed that golf courses, tennis courts and swimming pools will remain closed when the one-month Covid lockdown comes into force in England this Thursday.

There had been growing hope for English golfers the past 24 hours after a petition to keep golf courses open during the new lockdown reached more than its required 100,000 signatures for the subject to be discussed in Parliament this week.

MP Craig Tracey also revealed some positive news on Sunday evening when revealing he had a very positive conversation with Government on making case for golf courses to remain open.

However, Johnson was asked whether golf courses might be exempted from the rules on Monday - given the socially-distanced nature of the sport - by Conservative MP for Bracknell, James Sunderland.

"I must apologise to my honourable friend for not being able to offer the house a huge list of exemptions to the rules we've set out," said Johnson.

"Because once you unpick at one thing alas the effectiveness of the whole package is compromised. That's why I want everyone to work together for the next four weeks to get the R rate under control so that we can open things up again in time for December."

He added: "We will look at all the suggestions made and at any exceptions we can sensibly make, but it is difficult to take out one part of the Jenga block without disturbing the whole package."

Johnson was then asked by another MP if golf could continue with restrictions such as a two-ball format only.

The Prime Minister claimed that was "excellent suggestion that would be considered", but then downplayed the idea when revealing "golf will be able to resume in December."

A spokesman from Downing Street had earlier today quashed calls for golf courses and tennis courts to be exempt from lockdown restrictions that will last from November 5 to December 2.

"It's not the intention, however, for tennis courts or for golf courses to remain open," said Johnson's spokesman.

"People are able to use public spaces or walk or run in the park. The purpose of the tougher restrictions, which I expect are  going to be difficult for very many people, are to significantly reduce social contact."

Johnson explained in his latest speech on Saturday night that the one-month lockdown in England would permit unlimited outdoor exercise and recreation, but only in household bubbles, on your own or with one other person from a different household.

Despite golf being an easy sport to implement social distancing, the sport is seemingly not going to be permitted over the next four weeks in England.

Julian Knight, Chair of the Digital, Culture, Media and Sport, has since criticised the blanket approach the Government it taking to sports in England under the second national lockdown.

"A blanket ban is not the correct way of going about things," Mr Knight told BBC Radio 4 today.

"Perhaps there needs to be some reflection on the work that was done in the spring by these institutions.

"I know one golf club for instance that spent £5,000 on sanitising. I know another one that tested staff at a cost of £400 a week.

"Don't forget many of these courses are related to hotels and there they have had a real problem haven't they, because they have been unable to really open at any sort of capacity for most of the pandemic."

He added: "There are health benefits, both physical and mental. These sports are uniquely built for social distancing. They opened safely in the spring in a limited way, no clubhouses, changing rooms.

"We need to acknowledge the enormous expense and efforts from both these sports in order to make them Covid-secure."

Under the official lockdown guidelines, it has been made clear that golf courses and driving ranges will be closed to the public.

Upon hearing Johnson's latest lockdown speech to the nation on Saturday night, both England Golf chief executve Jeremy Tomlinson and Lawn Tennis Association's Scott Lloyd hit back at the government guidelines that currently refuse the continuation of golf and tennis in England from Thursday.

In an open latter to "fellow golfers", Tomlinson said: "I would like to make it clear England Golf's intention to respectfully challenge the government's rationale for closing golf courses.

"We will do so utilising all in our network - MPs, colleagues, media and friends - to make sure we are heard by government.

"Listening to the prime minister, the news that he is actively encouraging safe and responsible outdoor exercise for households or two individuals pointed to our great game of golf being at the heart of this policy.

"The guidance which followed stating that golf courses were on a list of venues which should close, therefore, appeared contradictory and came out of the blue."