Richard Bland has offered his take after the report was published into partying inside Boris Johnson's government during lockdown. 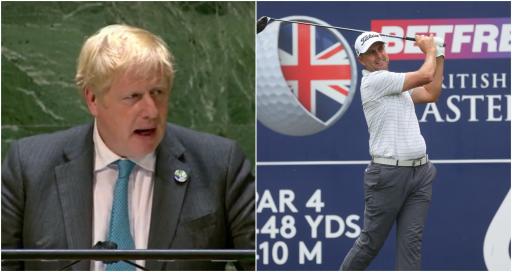 England's Richard Bland took aim at Boris Johnson in the wake of the report into partying at Downing Street during the pandemic.

Bland, who has recently qualified for the U.S. Open at Brookline in a few weeks' time, said "we deserve a better Prime Minister than this" after the long-awaited report.

The report, conducted by civil servant Sue Gray, revealed that staff inside No. 10 partied into the late hours whilst strict national lockdowns were in place.

Overall, the report that was published yesterday found that senior leadership in Johnson's government must "bear responsibility" over rules being broken.

The Prime Minister faced parliament yesterday and admitted he was "humbled" by the contents of the report but wanted to draw a line under the whole saga.

But he has faced a backlash of criticism. Details of the parties included wine being spilled onto walls, fights and lack of respect towards cleaning staff.

Parts of the report outline how senior government officials were organising events knowing that they shouldn't have been.

Her overall findings in the 60-page report features photographs of the parties that included senior government officials alongside Johnson.

Gray concluded in the report: "Many will be dismayed that behaviour of this kind took place on this scale at the heart of government.

"The public have a right to expect the very highest standards of behaviour in such places and clearly what happened fell well short of this."

Bland did not hold back with his response by posting this:

I don’t accept during strict lockdown rules. With people dying alone & terrified, it’s ok to have “work leaving parties” couldn’t have done this when the pandemic was over? I can’t stand Boris lying every day to the British public! We deserve a better Prime Minister than this