Alexandra Palace has reportedly withdrawn from hosting the draft party for the LIV Golf Invitational Series. 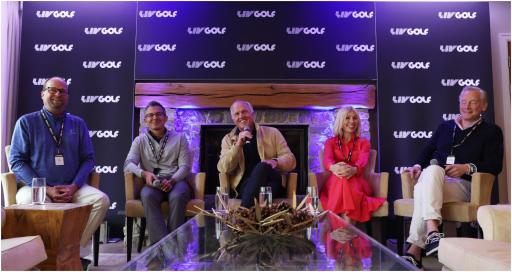 The fall-out from Greg Norman's controversial comments defending the Saudis ahead of their rival league opener appears to be continuing.

Telegraph Sport have reported that Alexandra Palace have backed out of staging the "draft" party on the eve of the LIV Golf Invitational Series Opener at Centurion Club.

The venue, which hosts music concerts and the PDC World Darts Championships in the UK among other things, appear to have decided against any perceived bad publicity.

A spokesperson told the paper: "I can confirm that the LIV golf series draw event is not taking place at our venue. We have a high number of organisations get in touch about holding potential events with us, but for commercial reasons we do not discuss details of these enquiries."

LIV Golf Investments chief executive Norman, 72, has consistently drawn criticism over his involvement with the rival league and trying to move attention away from the Saudis, who are funding the project via the Public Investment Fund.

Pressed about the murder and dismemberment of the Washington Post journalist Jamal Khashoggi, Norman said "everyone makes mistakes".

Norman also drew more criticism when he was asked about the kingdom's execution of 81 people in a single day in March.

Bratches resigned, it has been reported, as a direct result of Norman's comments about the State-approved murder of Khashoggi.

The venue is known in the United Kingdom as "Ally Pally".

The draft party was supposed to see players in attendance for the draw of the 12, four-man teams for the series.

In total, each tournament will have a prize purse of $25million.

Tickets for the draft party, on 7 June, were listed on the official LIV Golf website at £1,200.

Now there is no mention at all of the party at all.

Telegraph Sport say that a LIV golf insider suggested that this was a "kick in the teeth after Sean [Bratches] leaving".

By this point, we were supposed to know which players would be in the field for the first LIV Golf Invitational Series Opener.

But we are still none the wiser. It has been reported that the field will be unveiled on Thursday, 9 June.

Sergio Garcia, Ian Poulter, Lee Westwood, Martin Kaymer and Louis Oosthuizen are reportedly ready to run the risk of getting bans from the DP World Tour and PGA Tour by playing.

We still do not know if Phil Mickelson will play, who decided not to defend his PGA Championship.

Mickelson's mother recently was quoted by a US website stating that he is hardly recognisable these days.

More: Caddie once hired and fired within 24 hours sacked again