Golf rules: Young player does FULL 360 and smashes head, but what happens next?

We hope the little man is okay... 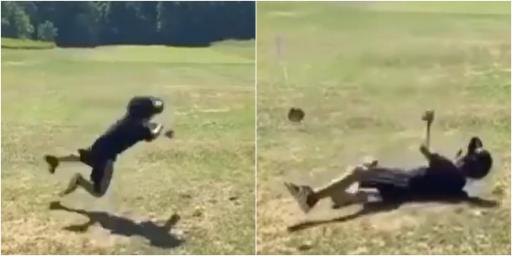 How many strokes is it if your child takes a swing, does a full 360 which sees him get off the ground then smash his face on the floor?

That's not really a question we would expect to ask on the golf course. But it appears to have happened to one poor, young soul. We do hope he is okay, and it looks as if he is. But this is pretty a pretty spectacular visual. Surely his power will one day rival Bryson DeChambeau?

A full 360. This young golfer leaves nothing in the tank as he takes an almighty swipe at the ball and (presumably) his parent films behind him. It doesn't look like those trainers have the best grip, and the tee box looks very dried out. That isn't the best combination.

Of course, this does beg a question. How many strokes is this? The folks over at @golfrules_questions have the answer. It's one. The player only had the intention to make one stroke. Of course, golf fans had their say on the clip.

Two strokes? One to the ground, one to the head.

One stroke per each revolution

About the only thing I haven't done on a golf tee

golf rules
instagram
viral content
swing
Tiger Woods
dechambeau
Previous
Scotland's Bob MacIntyre heading to 150th Open intending to WIN at St Andrews
Next
Golf rules: Are you allowed to BALANCE on one foot then walk through the stroke?