Tiger Woods and Charlie Woods: The best shot tracers from the PNC Championship

Team Woods combined to make 11 birdies in a row in sensational fashion... 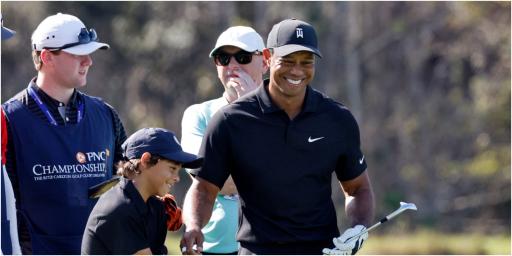 Tiger Woods and his son Charlie almost pulled off the most amazing feel good victory at the PNC Championship.

It was ultimately not to be as team Daly - big John and not so little John - took down the title with a record score of 27-under.

Daly senior celebrated the only way he knows how with a cigarette and a diet coke, while his son looked overcome with emotion.

Of course, Sunday with Woods' in red was not without its awesome moments.

Reflecting on the tournament, Woods detailed how the game plan was to have "18 looks" at birdie as they are both good putters.

The pair combined for a remarkable stretch of golf. They started birdie, birdie eagle then settled for three pars.

Then, from the 7th hole, they made 11 straight birdies and needed an eagle up the last to really force the issue.

Both tried to chip in, threatening the hole with the green side shots in front of thousands of fans in Orlando.

It wasn't to be and in their sixth attempt team Daly finally picked up the emotional win.

"I'm just happy and thankful that I'm able to do this.

"I still have my own leg, which was questionable for a while, and it's functioning. I'm just really tired - I'm not used to this.

"I think this might be only my fourth or fifth round of golf this year. I'm a little worn out. It was nice to have a cart."

Take a look at their best shots below: