The Swede's son proved to have the same sense of humour as his father... 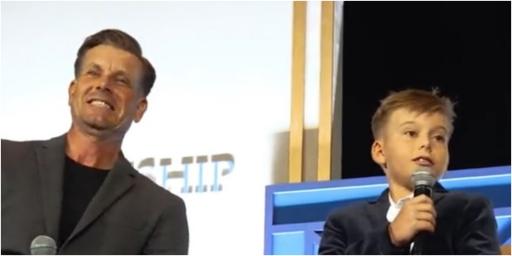 All eyes were on Tiger Woods Charlie Woods this week at the PNC Championship and rightly so.

At 17 he threw an absolute dart from 170 yards with a beautiful 5-iron and got the closest out of anyone, including the pros.

But while Charlie was in the limelight (and getting engaged with the crowd) there was another lad attempting to steal the show.

His name is Karl Stenson and he's the 11-year-old son of Sweden's Henrik Stenson. If you didn't know, Karl's got game.

He went flag hunting over the weekend, rolled in some monsters and even proved deadly with a microphone in his hand.

He appears media trained and even got involved in a mock press conference at the PNC Championship dinner before the tournament.

Karl ribbed his dad about his current form and it looks like he has got that famous dry wit down pat.

In that short interview, the youngest player to participate in the PNC Championship told how:

Henrik even had to put his hand over the microphone to save from any more jibes from his son.

The pair entertained over the weekend and finished in a tie for eighth place after reaching 18-under par.

John Daly and John Daly II won the tournament after reaching a record 27-under, two strokes ahead of Tiger Woods and Charlie.

Charlie may have stolen the limelight this year but he's definitely got some competition.

Karl struck again after their first round.

It appears the apple didn't fall far from the tree: