The Match: A guide to the Wynn Golf Club where Bryson & Brooks will battle

A storied history with stunning water features is a fitting setting for these two high-rollers. 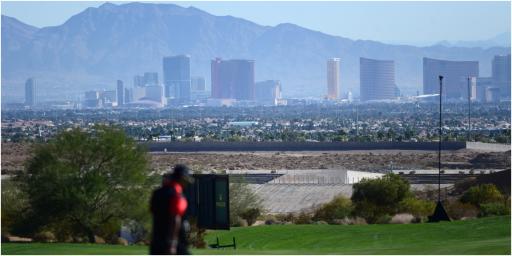 The feud started with slow-play and it reached its height with an eye-roll.

Now high-rollers Brooks Koepka and Bryson DeChambeau will settle it at The Match over 12 holes in Las Vegas.

They are playing at the Wynn Golf Club on the Las Vegas strip not far from the blackjack, roulette and poker tables.

Koepka and DeChambeau will peg it up at 4pm ET on 26 November.

The chips will be wagered and both will be going all-in.

Here are some photos I took at the Wynn Golf Club a few weeks back. Looking forward to seeing how it looks on television. pic.twitter.com/UrB9UPspst

What is there to know about the Wynn Golf Club?

It has an interesting history.

Tiger Woods and Jack Nicklaus are just two big names who have won here before.

That victory came after Woods announced: "Well I guess hello, world". He never looked back.

Since then, it was purchased by Steve Wynn and redesigned by Tom Fazio.

What else? Water comes into play. A lot. In fact, the wet stuff is in play over 12 holes. There are also reportedly more than 8,000 trees on the landscape.

The 18th also offers up a thrilling finale. It's a par-3. And from the tips it can be played from 249-yards. This is to a green which boasts a 35-foot waterfall behind it.

Sadly, we might not get to see this in The Match as it's only over 12 holes. But possibly it could feature in a playoff? Who knows.

Although Las Vegas is clearly tailored for the high rollers and this looks like an exclusive property, it's also open to the public.

But it comes at a price.

You also might be thinking, why is this only 12 holes? It's reportedly to do with which holes will look best on camera.