Jack Cantlay is the 18-year-old brother of World No.4 Patrick Cantlay and he broke an impressive record in the US Junior Amateur on Monday. 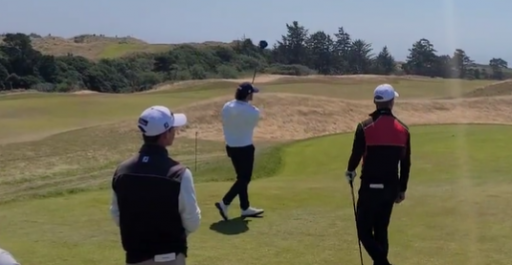 Some families produce children that were born to do one thing and it would appear that the Cantlay brothers were put on this earth to swing a golf club.

Patrick, who is teeing it up at the Rocket Mortgage Classic this week, is the current World No.4 golfer and he is a seven-time winner on the PGA Tour. He made his Ryder Cup debut in 2021 and he has earned nearly $30 million in his career.

His younger brother Jack is on a similar trajectory. He may just be 18 years of age, but his play at Bandon Dunes on Monday was enough evidence to suggest he could be bound for greatness as well.

The Oregon site is host to the US Junior Amateur this week, an event that Tiger Woods won three years on the spin, and the young American played in the first round of the stroke-play qualifying on Monday. His first nine on the David McLay Kidd course was played in an uninspiring score of 3-over-par.

But his second nine, the front nine, was staggering. Jack carded four birdies and two eagles to shoot 28 on his way in. This is the lowest nine-hole score ever shot in the championship's 74-year history.

“I think that’s the first time I have broken 30. It’s a first time for everything I guess.” -Jack pic.twitter.com/tllvaJqIGF

"I saw my buddy Luke Powell on the putting green and he said, ‘How are you playing?’ and I said ‘three over’ and he said, ‘Turn it around on the front nine.’ So I birdied the first hole and made a lot more 3s on that side.

His 67 left him one shot behind Erich Fortlage and Harvey Young. The tee times in the second round have been delayed by two hours due to fog.

Jack has been a sponge since the age of 7, watching Patrick play at the most iconic venues in the world such as Pebble Beach, Shinnecock Hills, Royal Portrush, Augusta National and St Andrews last week when Cameron Smith won his maiden major title.

All four Cantlay children, Patrick, Nick, Caroline and Jack, are invested in the game. Nick has conditional status on PGA Tour Canada and Caroline is a tournament coordinator at Pebble Beach Resorts.