Phil Mickelson hits DRIVER OFF THE PINE on Champions Tour

Phil Mickelson explains why he opted with the driver off the deck which resulted in a birdie during the second round of the Charles Schwab at Ozarks National. 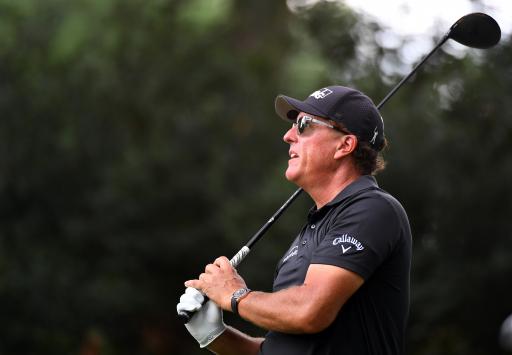 Phil Mickelson made an incredible start to his Champions Tour debut on Monday after he shot an 11-under par round and the golf icon extended his lead after day two, when he shot a 7-under par round to take his score to 17-under par and four strokes ahead.

After missing out on the next FedExCup play-off event, Mickelson - who turned 50 in June - decided to make his awaited debut on the Champions Tour where he is looking very comfortable so far.

During Tuesday's round, Mickelson's tee shot at the par-5 9th landed by a tree surrounded by pine straw. A loose wire was seen hanging from the tree and Mickelson called a rules official over to see if he could move his ball.

“I’m going to get hurt, potentially,” he told a rules official.

The rules official agreed with Mickelson and he was granted relief, but he still faced a tricky second shot that needed to be played under the low-hanging branches and up towards the green.

Needed to play a low cut, Mickelson had an iron in his hands but in true Lefty fashion, opted for something a little more inventive.

“Give me the driver,” Mickelson said.

The ball moved perfectly from right to left, but Mickelson couldn't quite cut it enough to get it onto the green, which left a delicate chip shot which he played beautifully to set up the birdie.

And he makes birdie! pic.twitter.com/QMzuN0yTjk

After his round, Mickelson explaiend why he chose to go with the driver and not an iron: “The fact is I had to hit a low cut, and it was much easier to hit a low cut with that club than it was a 2-iron. I had left-to-right wind, and I was going to have to play right of that post, and that wind was going to take it further right, and a 2-iron was going to be too hard for me to get it to cut back into that wind. A driver off the deck cuts almost automatically.”

NEXT PAGE: Who MADE and MISSED the cut for the next FedExCup play-off?