A Champions Tour player incurred a two-stroke penalty after he ran out of golf balls at the Hoag Classic. 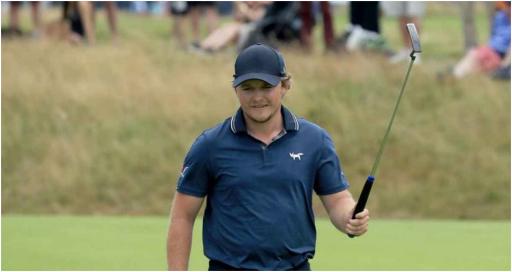 Mark Calcavecchia, who won the 1989 Open Championship at Royal Troon, detailed how he saw something he had never seen in 41 years.

He was referring to the fact that Rick Garboski had run out of golf balls. Long story short, he thought he had six when he had three.

Two golf balls "in the drink" at the Hoag Classic last week meant Garboski had to borrow one and incur a two-shot penalty.

What probably irritated him a little bit more was that this was his first ever event on the Champions Tour.

He also had to drop back a group, Calcavecchia said, so he could wait for some fresh golf balls to be brought out from the locker room.

It didn't end there. Garboski's misery was compounded when he was given another penalty: this time for slow play.

Perhaps he was a bit flustered. Under the Rules of golf, players are permitted to ask fellow pros for a golf ball if they run out.

However, those that are being asked are "not obliged" to lend them. This is under Rule 4.2a(1).

"It’s an unfortunate error, and I'm going to laugh about it," Garboski later said.

"I'm just so thankful that the tour officials figured out a way for me to actually finish.

"I didn't mind the penalties, because I just wanted to be able to play."

Apparently, Garboski was giving away golf balls as souvenirs and simply forgot to re-stock his bag.

Retief Goosen eventually emerged as the winner of the tournament with a three-stroke victory at Newport Beach Country Club.

Saw something today that was an all time 1st in 41 years of pro golf. Rick Groboski ran out of balls. Only had 3. Thought he had 6. Anyways after 2 balls in the drink on 4 had to borrow a ball. 2 shot penalty. Then had to drop back a group to wait for locker room guy to bring

One man who has experienced this before is Eddie Pepperell. In 2019, he was DQ'd from the Turkish Airlines Open on the European Tour.

Pepperell, 31, a former winner of the British Masters, ran out of golf balls at the 13th hole.

His playing partner for the day, Martin Kaymer, said he had never seen anything like it in Antalya.

Pepperell reportedly did not even ask to borrow a golf ball, and apparently was using his wedge to putt too.

"It did not look like he wanted to be play," a confused Kaymer once said.

Perhaps with this in mind, this is how Pepperell jokingly responded to Garboski's woes: