Get to know Team Europe ahead of their clash against Team USA this weekend. 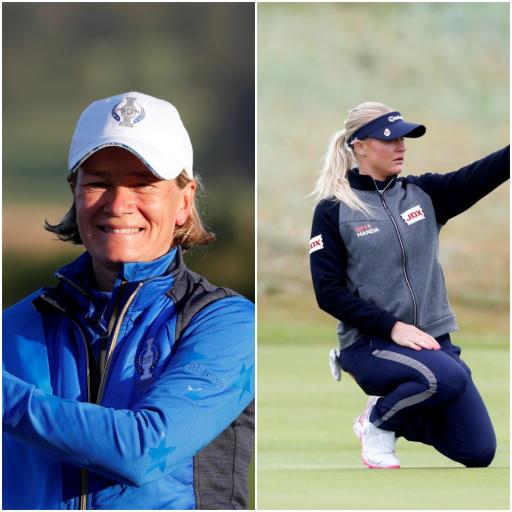 The 2021 Solheim Cup will be decided this weekend at Inverness Club in Toledo, Ohio, United States.

Team Europe, captained by 2019-winning captain Catriona Matthew will have work to do against a star-studded Team USA.

Here, GolfMagic takes a look at Team Europe and their playing histories at the Solheim Cup.

A former Ladies European Tour rookie of the year, winning in 2015.

It took her five years to win again.

Had a strong finish to the season and was T2 at the AIG Women’s Open.

Nearly quit golf but became a sensation when she won the 2020 AIG Women’s Open.

Has backed it up with her performances since.

She only got into her breakout major due to players not travelling due to the pandemic.

AIG Women’s Open champion and the most experienced player on either side.

Her major win was her first in four years.

Is reported to suit the Inverness Club, due to her prolificacy in hitting greens in reg.

Hull is still only 25 and an experienced head for Team Europe.

She has struggled for form this season, but revels in Solheim Cup atmospheres.

RELATED: GET TO KNOW TEAM USA AT THE SOLHEIM CUP

Defeated Danielle Kang at Gleneagles in 2019.

A veteran for Team Europe and still only 31.

She has been in fairly poor form over recent months.

No doubt her experience will invaluable for Catriona Matthew.

Had her most impressive season as a professional.

Shot 61 at the Amundi Evian Championship, equalling the record for lowest score.

The first Irishwoman to ever play in a Solheim Cup.

Won her first LPGA Tour event in 2020 at Gainbridge.

Had her best finish in a major in August, tying for second at the AIG Women’s Open.

Became the first Finn to win on the LPGA Tour earlier this season.

In the summer she won the Ladies European Tour for the first time.

She is the first Finn to compete for Team Europe.

Still searching for her first LPGA Tour win, but she has got game.

Has secured three top-15s in majors this year.

Smashes it, averaging 275 off the tee this year.

Gets as pumped as Ian Poulter when she drains a putt.

She didn’t make the team but served as an assistant captain.

Won on the LPGA Tour for the first time last October.

Swept aside everyone and left them in her wake in her first appearance in 2019.

Surely they will be paired together again?!

NEXT PAGE: OUR BETTING TIPS FOR THE SOLHEIM CUP