It would be hard to play another round of golf after coming this close to a hole-in-one... 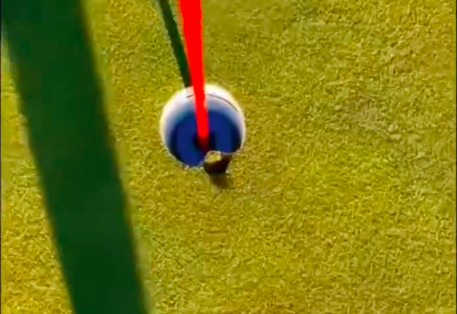 I was lucky enough to be a spectator at The Open Championship at Royal St. George's last month and it was truly a week to remember.

On the par-3 11th hole in the final round, Louis Oosthuizen came so close to making a hole-in-one, as his ball rolled towards the hole and clattered against the flag.

It would have been one of the best moments of my life while spectating sports if the South African's ball had dropped, but unfortunately it wasn't to be.

It just goes to show that as much as a perfect shot, you need a lot of luck to make a hole-in-one and for one golfer, he found this out the hard way.

Footage emerged on social media of a golfer whose ball landed so close to the hole that when it landed, it dug into the ground and dented the side of the cup.

We don't know if the man saw the ball land as he hit it from the tee box, but we do know that when he walked up to the hole to discover what had happened, he was devastated.

I have personally never come close to a hole-in-one, so I can only imagine how I would have reacted if I saw that my ball was roughly a millimetre from going in the hole.

We all love seeing shots that people have hit on social media that have come within inches of glory, but we have never seen a shot that has dented the cup before.

But this is why our sport of golf is so great. You can hit the ball and it can finish in some incredible and extraordinary places.