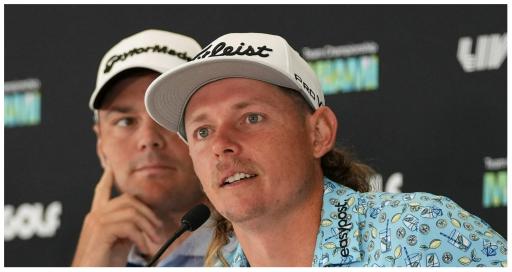 This is the first time he has returned to Australia since the beginning of the COVID-19 pandemic. This tournament is also being played for the first time in two years because of travel restrictions.

Related: Cameron Smith on his "scary" move to LIV Golf

LIV Golf's marquee signing Smith, 29, joined the media on Tuesday sitting alongside the Claret Jug that he won at the 150th Open Championship at St. Andrews, pipping Rory McIlroy.

McIlroy was left in tears in the arms of Erica Stoll after that disappointment.

But back to Smith who revealed that he's cried a few times since being home as he reflected on the biggest achievement of his career to date.

"I still can't believe [the claret jug is] here, still can't believe I won it. The whole tournament seems like a bit of a blackout. I can't really remember much from the week. I've seen a few replays and stuff on TV. I've teared up a few times since I've been at home – it's been good."

Smith joined LIV Golf after the conclusion of the PGA Tour's FedEx Cup Playoffs. At the time, it was probably the worst kept secret in golf.

The Australian was clearly not impressed when he was asked about his future in his press conference immediately after victory at the home of golf.

One of the arguments as to why LIV players are paid so handsomely is because there was and is a massive risk about their future.

Will they be able to participate in the majors? Will LIV Golf get Official World Golf Ranking accreditation?

Jon Rahm and Rory McIlroy clearly disagree on this topic.

As for Smith, he said:

"Since joining [LIV], I feel not having any points has definitely hurt me a fair bit. Especially with the golf, I've been playing some really, really solid golf. Yeah, it's a bit of a pain, but there's no pressure to come out here."

The good news for Smith is that he can earn world ranking points this week.

"It's just exciting being back and I think the buzz of the crowd and all that stuff is going to mean more to me than a few world ranking points."

Unsurprisingly, Smith has been paired with Adam Scott.

Scott has also confirmed that Tiger's legendary caddie - Steve Williams - will be coming out of retirement to work together once again.

Next page: Nine players who changed their minds about LIV Golf