IT'S WAR! Report suggests golf's big wigs to meet at The Match to counter LIV

The chief executives of the main tours and major championships will reportedly meet at The Match featuring Tiger Woods and Rory McIlroy to discuss LIV Golf. 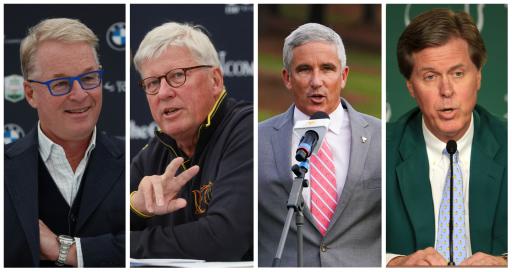 The top brass in world golf are due to meet in Florida next week at the next iteration of The Match to discuss how they will respond to LIV Golf, according to the Daily Telegraph.

Per Jamie Corrigan's report, it has been suggested that the chief execs of the main tours and the majors will meet in Florida at Pelican Golf Club to discuss all things LIV Golf.

The publication state that DP World Tour chief executive and PGA Tour boss Jay Monahan will be in attendance, alongside Mike Whan of the USGA, Martin Slumbers of the R&A and the PGA of America's Seth Waugh.

Related: Cam Smith laments missing out on World No.1

It is not known whether Augusta National chairman Fred Ridley will be in attendance.

Ridley was previously alleged in court documents as urging professional golfers not to join the Saudi-backed ahead of the 86th Masters.

The Match is a made-for-TV event, which will be played over 12 holes on 10 December. Tiger Woods and Rory McIlroy are due to take on Justin Thomas and Jordan Spieth.

There will now be considerable doubt over whether or not Woods, 46, will be able to compete. He has withdrawn from the Hero World Challenge this week - which is the tournament he hosts in the Bahamas on the PGA Tour - because of a foot injury.

Woods said his plan is still to play in The Match and also the father/son jaunt - the PNC Championship in Florida - with Charlie Woods in December.

It goes without saying that the professional landscape in world golf has changed considerably since LIV Golf's inaugural event in June.

The divisive commissioner of LIV Golf - Greg Norman - is reportedly due to announce in the coming days what the 2023 LIV Golf League schedule will look like.

There are 14 events planned globally, with as many as 60 players participating.

LIV Golf have already confirmed El Camaleon Golf Club in Mexico will host their opening event in January. The course is designed by Norman and has hosted the World Wide Technology Championship at Mayakoba on the PGA Tour since 2007.

There were rumours Norman could be axed by LIV bosses and "moved upstairs".

This was later denied by LIV Golf.

Elsewhere, the next edition of The Match will be without Phil Mickelson, as he has been booted from the franchise due to the six-time major champion's association with LIV Golf.