Cameron Smith has opened up on Adam Scott's LIV Golf conundrum after the 49-year-old Australian made the bold claim he wants to win all the majors. 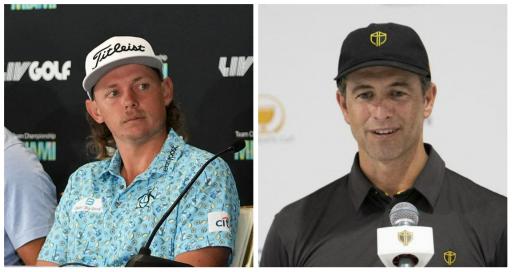 Cameron Smith says he's still not sure what stance Adam Scott is taking over LIV Golf but confirmed he has been "in the middle lane for so long".

Scott - who has got Tiger Woods' legendary caddie Steve Williams back on the bag - has made absolutely no secret about his position over the breakaway tour.

The former Masters champion does not see Greg Norman's league as "pure evil". He suggested the situation was more complicated than many believed earlier in the year when a host of elite names were discussing whether they would or wouldn't be going.

Related: Nine players who changed their mind over LIV Golf

Before the Presidents Cup he was asked once again about his future.

"Why I am still on the PGA Tour is because it suits me best to be on the PGA Tour. It’s as simple as that, really. There’s one thing I think I haven’t grasped is giving up my entire professional life of trying to achieve these things here and just leaving it behind. I'm obviously not ready to do that. I may never be, as well, to be clear. I just think that seems to be a hurdle that - well, it hasn’t really presented itself to me anyway."

Fast forward a few months and Scott remains a PGA Tour player. Earlier in the week he made the bold claim that he is targeting winning all the majors before he retires.

Scott triumphed at the 2013 Masters over the now-disgraced Angel Cabrera in a playoff at Augusta National.

To date it's the only major championship he has ticked off.

Related: Have you seen the new-look 13th hole at Augusta?

The 49-year-old said he believes he still has all of the tools to compete at the highest level.

Of his lofty target, Scott said:

"That sounds like a lot, but really it's three more events. It's just got to be the right week. I have all the tools. I'm still very healthy. I'm still moving the golf ball well and I have a lot of experience. I'm just trying to put it all together. Playing consistently better is going to help that."

"I'm really not sure on what his stance is. I obviously can't talk for him, he's kind of been in the middle for so long he's just going with whatever happens. I don't know what he's going to do."
Smith joined LIV Golf in August 2022 for a fee of $140m. He now captains the all-Australian LIV team - Punch GC - comprising of Marc Leishman, Wade Ormsby and Matt Jones.

Leishman's views contrast with that of Scott. Whilst Scott is targeting more majors, Leishman has said that he would be "fine" if were unable to play any more major championships if he were banned because of his decision to join the Saudi-financed tour.