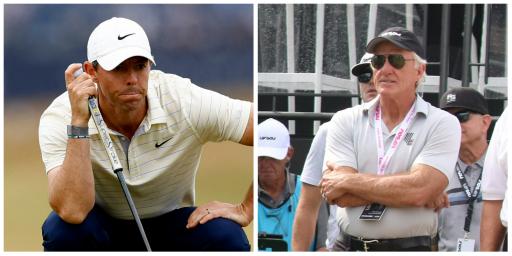 LIV Golf Tour commissioner Greg Norman accused Rory McIlroy of asking for "sizeable appearance fees" to play in Saudi Arabia after the Northern Irishman took a dig at his career.

After McIlroy won the RBC Canadian Open in June, he mentioned he'd now reached the 21-mark in PGA Tour wins which was "one more than someone else."

After he celebrated his victory at St. George’s in Ontario, Norman fired back with comments of his own, claiming McIlroy is also paid to sit on the Player Advisory Council of the PGA Tour.

A spat hasn't quite emerged, but you could say Norman and McIlroy have a fairly irreparable relationship after the four-time major champion has described the Saudi-backed series as a "money-grab" and has previously described the defectors as "duplicitous."

Ahead of the FedEx St. Jude Championship this week, McIlroy said "common sense prevailed" after a judge ruled against three LIV Golf rebels who wished to be reinstated into the FedEx Cup standings.

"I respect Rory, but I am somewhat confused by his approach. But then, he is paid to sit on the PGA Tour’s Player Advisory Council, so he is obviously going to support the tour," Norman said to Australian Golf Digest.

"I do know he has asked for sizeable appearance fees to play in Saudi Arabia. His comments also show competition is a wonderful thing.

"So, I take it as a compliment that he wanted to beat my 20 PGA Tour wins. His next goal should be to win more than 91 tournaments globally or to maintain No.1 in the world for more than 331 weeks."

Norman quite rightly pointed out his extremely impressive career which included two wins at The Open Championship, but his legacy will now be clouded by his involvement with the LIV Golf schedule.

His relationship with the Public Investment Fund of Saudi Arabia, the majority shareholder in LIV Golf Investments, will always hang over him as well as striking a divide through the world of professional golf.

The accusations of sportswashing will never go away, while it also seems that the dissenting voices of McIlroy, Thomas, Horschel and co. will also still remain.