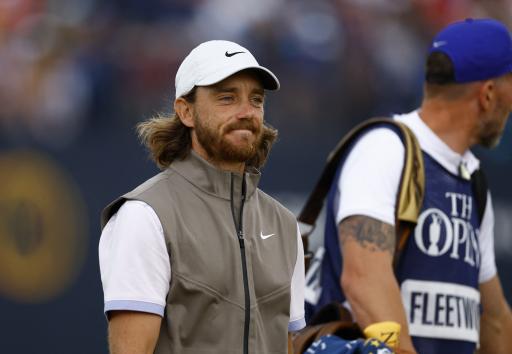 Tommy Fleetwood's caddie Ian Finnis has leapt to the defence of Cameron Smith, who appears likely to join the LIV Golf Invitational Series.

Smith is currently playing the first event of the FedEx Cup Playoffs on the PGA Tour, trying to wrestle the $18million check away from Scottie Scheffler.

But so far much to the likely frustration of Smith, the chatter has been on what he will be doing after the conclusion of the 2022-2023 season.

The Telegraph have reported that Smith, 28, has already signed a deal that is said to be north of $100million to play in LIV Golf events.

LIV Golf have previously outlined how they are planning on hosting some events in their 14-event season next year in Australia.

Smith would be the marquee signing for the controversial series as it would undoubtedly shift the narrative for Greg Norman and his "visionary" team.

It is claimed he would be the team captain of an all-Australian team that includes Marc Leishman. Adam Scott is also linked.

If the 150th Open winner pens the deal with LIV then it would surely direct the talk away from the series just being a place where the old-timers are cashing in on their careers.

To be fair Cam smith one of nicest guys av ever met too. He getting alot of hate for living his life the way he wants to. You think that right? Av no problem what ever his choice is! I wish him well. https://t.co/nhOTJ3Pn0h

Fleetwood is not playing in the first playoff event, the FedEx St. Jude Championship, following the death of his mother.

It is not known if the Englishman will play the BMW Championship next week. He said he was taking some time away to be with his family.

Elsewhere, Smith was also involved in a rather funny moment with Scottie Scheffler during the first round at TPC Southwind.

Scheffler was in a world of his own and walked in front of Smith as he tried to read his putt.

The pair later saw the funny side of this incident.

Next page: Why haven't the PGA Tour suspended Cameron Smith?