Harrington: LIV Golf players still my friends but it's like Christmas

Padraig Harrington says he is still pals with the LIV Golf players as he rules himself out of Ryder Cup captaincy. 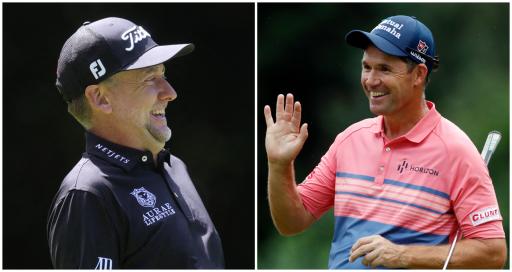 Padraig Harrington says he is still friends with the LIV Golf rebels but playing an event alongside them is “a bit like a Christmas dinner”.

Harrington, 50, is playing the JP McManus Pro-Am at Adare Manor this week alongside 10 players who have joined the Saudi-backed rival league led by Greg Norman.

McDowell admits that he wishes he didn’t say anything when publicly defending the series at Centurion Club.

Some players have suggested that exchanges on the range can get a bit awkward. Scotland’s Bob MacIntyre reportedly witnessed Sergio Garcia going into an expletive-laden rant when the DP World Tour announced sanctions against the LIV Golf players.

Ian Poulter and two other LIV Golf players have been successful in achieving a stay in legal proceedings, allowing them to tee it up in the forthcoming Genesis Scottish Open.

But for Harrington, he admits that “all these guys are my friends, 100 per cent” despite the atmosphere resembling Thanksgiving or a Christmas dinner.

“Honestly, all these guys are my friends, 100 per cent. I haven't got that deep into The Ryder Cup side of things yet. I know I talked about it the other day about the competitive side. I really don't know what the right scenario is going forward for The Ryder Cup,” he told the media.

“You could have a sibling sitting there and -- we'll Americanise it: You could be a Republican; they could be a Democrat but you're friends at that particular time, and maybe politics isn't mentioned at the dinner table.

“We are here for two days of -- and it's great to see. You know, golf is getting a bit of a hard time at the moment. It's great to see, look what we can do with golf.

“Look at the money that's raised here. Look at the people that are going to enjoy this weekend. It's great to see what golf can really do in a situation like this, and as I said, it's fantastic.

“So, it is a little bit like, as I said, like a Christmas dinner, everybody here, and they are all our friends. Everybody is friends here, so on an individual basis, this is not a difficult situation here this week. We are all friends.

“And as regards, as you said The Ryder Cup, I really haven't gotten into what's on the table, what's the proposals and what's going to go forward.

“Outside of that, this week, we are here to have fun and it's so far, so good.”

Ryder Cup Europe captain Henrik Stenson is reportedly mulling over an offer from LIV Golf. If he were to join the series it would almost certainly mean he will forfeit his captaincy.

Harrington admitted he would not like to take charge again. It’s a one and done thing, he said.

“I think there's plenty of people who have got a future in being Ryder Cup Captain and I think everybody should be given that chance. I had my chance.

“As much as I loved the experience of being Ryder Cup Captain, and I really did, it was a tough call, and I don't see myself going back into that arena again.

“It's just the nature of the business. It's a one-and-done, and it's a bigger event than the individual.

“So, there's loads of worthy captains. Whatever happens, there's plenty of people out there who will do the job justice.”

The DP World Tour have recently strengthened their “strategic alliance” with the PGA Tour.

Harrington said: “I like the fact that they made the announcement last week that was more focused on DP World Tour and the PGA TOUR. It gives great pathways and gives a bit of foresight going forward.

“You know, at the moment, there's no doubt that the PGA Tour was the dominant tour in the game. It's amazing how much it's evolved from the '80s where there was that contention that Europe was very much a second -- not a second, but a competing tour.

“The last ten years, the PGA Tour has stolen the lead, all the players at the very top end have wanted to go. Now with this new announcement and partnership, they won't go as quick.

“I think for me it was ideal that I played in Europe from '96 to 2005, even though I was eligible to go to the U.S., but I was patient and learnt my trade and grew and went when I was very confident and ready.

“You know, it's very difficult to go into a new pond, be a big fish in Europe and you go to the states and you're a little fish. It's tough to change, even when you're good enough, it's tough to change and we've seen players step back.

“The future, I liked what they said and I look forward to seeing this because you know, it definitely looks like there is a nice future for the European Tour and a nice pathway for young players to stay and grow their game and become mature.

“The college system is not for everybody, so definitely was very positive.”

Next page: Bryson DeChambeau jokes about his LIV Golf deal