Dustin Johnson's sponsor RBC has released a statement in the wake of his PGA Tour U-turn. 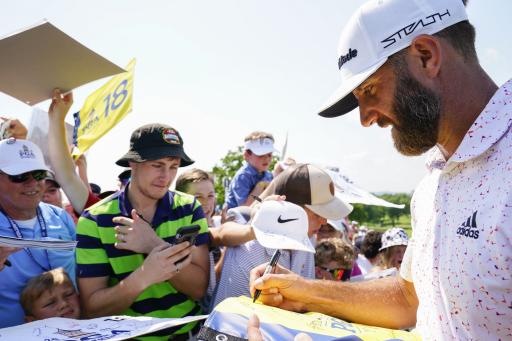 Johnson, 37, stunned the golf world overnight when his name appeared on the list of confirmed participants scheduled to play the first event of the Saudi-backed rebel league at Centurion Club next week.

UPDATE: Dustin Johnson has now been AXED by his major sponsor RBC, and so too has Graeme McDowell

The former World No.1 and two-time major winner has always been heavily linked with the Greg Norman-led league, though in February he said he was "fully committed" to the PGA Tour.

Last night his agent confirmed that after mulling this decision for two years, DJ felt like the offer was "too compelling" to turn down. He said Johnson had no issue with PGA Tour and was "grateful" for everything it has given him.

The first event of the global, $255million eight-event series bankrolled by PIF (the sovereign wealth fund of Saudi Arabia) conflicts with the RBC Canadian Open on 9 June.

Royal Bank of Canada has been one of Johnson's sponsors since 2018. They released a statement saying they were "extremely disappointed" with his decision and "wish him well", hinting at a possible parting of the ways.

A statement from RBC read: "RBC is a proud partner of the PGA Tour. Our partnership is anchored with two world-class golf tournaments—the RBC Heritage and the RBC Canadian Open.

"The PGA Tour has been clear about its intentions in accordance with its tournament regulations should a golfer choose to play in a tournament outside the tour, including the LIV Golf Invitational Series.

"We were recently made aware that Dustin Johnson made the decision to play the LIV Golf Invitational Series opener.

"DJ has been a valued RBC team member since 2018. While we are extremely disappointed in his decision, we wish him well."

What's more, when Johnson participated in the Saudi International in February, he was pictured without their logo on his clothing.

When he appeared at the Masters, the RBC logo was visible again.

PGA Tour commissioner Jay Monahan has previously issued threats of suspensions or bans for players who participate in the rival league.

He drew a line in the sand (along with the DP World Tour), by denying their members releases for the first event of the series.