LIV Golf: Talor Gooch on sportswashing? "I'm a golfer, I'm not that smart"

Talor Gooch faced the media at Centurion Club ahead of the LIV Golf Invitational Series opener this week. 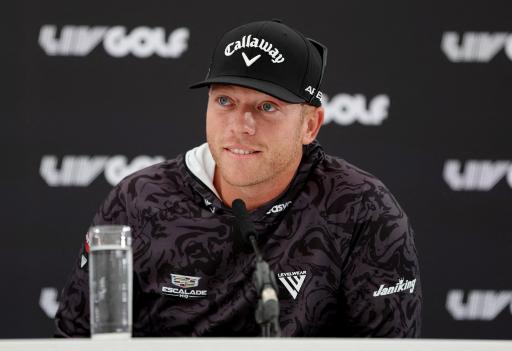 Talor Gooch was one of the surprise names to be included in the Saudi-backed LIV Golf Invitational Series opener at Centurion.

Not because of the sums of money involved, but because he is an in-form 30-year-old PGA Tour professional with a bright future ahead.

He now occupies the No.35 ranking in the world and has had a strong season so far, winning his second PGA Tour title at the RSM Classic.

Okay, so take away the taxes, the cost of paying your caddy and all the other expenses, it still doesn't exactly make for a bad financial year.

The fact LIV Golf Investments were able to persuade Gooch to take this risk when we do not know what the future holds is interesting.

Gooch, you could argue, legitimately is the type of player who could enrich himself further with all the spoils on offer without having to risk getting a life ban.

He has spots in all of the majors and would likely have more money coming in from sponsors and the FedEx Cup cash, which has increased this year with the winner earning $18million.

And he still jumps.

Clearly, he doesn't seem to fussed about the ramifications of his decision, despite declaring he'd still like to play in the Ryder Cup and Presidents Cup.

Dustin Johnson, at this moment in time, is now ineligible for the Ryder Cup next year in Rome after resigning from the PGA Tour.

"Everyone kind of agrees that we're trying to grow the game of golf.

"I'm fortunate to have gotten to a point where I'm one of the better players on the PGA Tour currently, and I just don't see how it benefits the fans, the game of golf to start throwing out bans, suspensions, things of that nature.

"I'm hopeful, and that's why I haven't submitted my resignation from the Tour, because I'm hopeful to continue to play the PGA Tour, and I'm hopeful that both LIV Golf and the PGA Tour can coincide. I don't see any reason that that can't happen."

Gooch, like his fellow competitors who faced the media at Centurion Club, was pressed about the issue of the human rights abuses of Saudi Arabia.

Does he think it's a fair criticism?

"I mean, I don't think that's fair, but also I'm a golfer, I'm not that smart. I try to hit a golf ball into a small hole. Golf is hard enough. I try to worry about golf, and I'm excited about this week," he said.