Tiger Woods did not appear too happy with a camera operator during the first round of the PGA Championship. 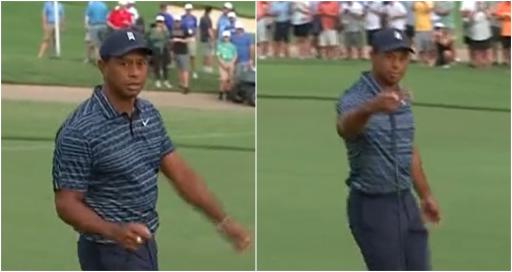 Tiger Woods did not appear too pleased with a camera operator during Thursday's first round of the PGA Championship at Southern Hills.

Woods arrived in Oklahoma wearing his baseball cap backwards for his warm-up and then when it was go-time he made birdie on his first hole of the day.

Related: ESPN announcers stunned at the size of Tiger Woods' sandwich during the first round of the PGA Championship

It was the perfect start and vintage Tiger as he played in front of an enormous crowd alongside Rory McIlroy and Jordan Spieth.

And it really wasn't too long before he appeared to lose his patience (again, vintage Tiger). It was on the 10th fairway (his first hole) when this exchange occurred.

"Give me some space please!"

Tiger Woods was unhappy with the cameraman getting too close whilst walking from the first tee at the PGA Championship pic.twitter.com/VQ3emFrZ8P

Twice, Woods asks: "Would you mind giving me some breathing space, please?"

Woods is using his golf club (sort of) as a cane and tries not to let the encroaching behaviour bother him but in the end he just says: "Back off!"

Of course, what happened didn't really get to him as he made birdie.

Still, if there's one thing we know about Woods during a golf tournament - let alone a major - is not to cross him when he's on the prowl.

Under no circumstances whatsoever do you do anything to p*** him off or put him off his stride.

Woods followed his birdie at the par-4 10th with three pars before gaining another stroke at the par-3 14th.

Frustratingly for Woods he made bogeys at 15 and 18 to make the turn in level par.

At this point on the featured group coverage they pointed out that his limp was getting a little bit worse.

Consecutive bogeys followed at the first and second holes.

Though by that point the camera operators (surely) had got the message?

It was McIlroy who had the best start out of all three players, racing to 5-under par after 13 holes to take the early lead.