PGA Championship: Why John Daly is using a golf cart at Southern Hills

Here's why John Daly is using a golf cart at the PGA Championship at Southern Hills. 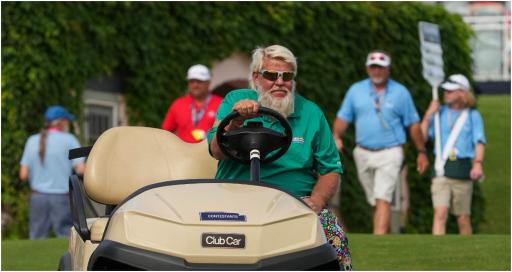 Before the PGA Championship, golf fans were wondering how Tiger Woods would handle the walk after observing his increasingly-laboured gait at the Masters. John Daly doesn't have to worry.

Because Daly, 56, has osteoarthritis in his right knee, the PGA of America grants him the use of a cart under the Americans with Disabilities Act.

Daly has had a fairly mediocre season so far on the PGA Tour Champions. It has included a disqualification which came last week at Regions Tradition at TPC Sugarloaf after he forgot to sign his score card. Whoops.

There was also an ugly little four-putt thrown in for good measure and Daly hasn't commented on the first time he has ever been DQ'd on the senior circuit.

Daly, of course, has seen his fair share of being booted out of tournaments in his heyday on the PGA Tour. Five times, to be precise and the last time he was disqualified came at the Valero Texas Open in 2003.

In his first round at the 2022 PGA Championship, Daly found something a bit special and turned back the clock.

After 10 holes he found himself at 3-under par and was amongst the early leaders that included a composed Rory McIlroy.

Daly hit the opening tee shot of the second men's major of the year in Oklahoma.

The 1991 champion - who that week only just made his tee time after sneaking in as an alternate and driving in overnight - almost holed his second shot at the par-4 first but made do with birdie.

He was playing alongside American Shaun Micheel and Korea's YE Yang.

Daly was paired with Woods at the 2007 PGA Championship. That week, it was 107 degrees.

When Woods asked him about how much water he drank, Daly told him he'd crushed 13 Diet Cokes.

Over the course of 18 holes, Daly has been known to smoke 21 cigarettes, constantly chug Diet Cokes and eat six packs of Peanut Butter M&Ms.