"What is he thinking?!" Tyrrell Hatton DENTS GREEN at PGA Championship

Tyrrell Hatton let his frustration get the better of him during his opening round of the PGA Championship. 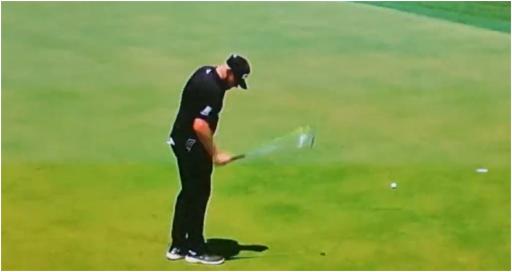 Tyrrell Hatton let his temper get the better of him again during Thursday's first round of the PGA Championship at Southern Hills.

Hatton was playing the eighth hole in Oklahoma, the beast of a par-3 that measures at nearly 250 yards, when this  happened.

It's a brutally tough hole and the Englishman previously took issue over its length.

He wondered if the USGA and PGA of America were "in a fight" to see which major could have the longest par-3.

"It would be nice if they were a bit more creative with course setup rather than just trying to make it hard through length all the time," he said.

Related: Tyrrell Hatton is already upset with the course layout at the PGA Championship

When this happened Hatton was facing a putt that he didn't really want to have to save his par. It was just a little bit too far away.

It wasn't his best effort and no sooner had he made the stroke he hit the green with his putter in frustration.

"He's made a bit of a mess on that green," said Laura Davies on the Sky Sports coverage for UK viewers.

"That's not good, what is he thinking?! Yeah, go and clean that up!"

Hatton eventually finished with a level par opening round. On his last hole of the day, the par-4 ninth, he managed to chip in.

The 30-year-old had three bogeys and three birdies in his opening round.

But he may be spoken to quietly by tournament officials.

Golf fans on social media were quick to put Hatton on blast:

@TyrrellHatton just left a lovely dent in the green through a bit of a tantrum there. Really not a good example. #golf #greenkeeping #PGAChampionship

What an embarrassment to English Golf @TyrrellHatton has become. Commentators regularly apologising for his language and now taking whacks out of greens before his opponents have played them with his putter. Not a player I want my 10 year old to watch or aspire to be.

@TyrrellHatton Anger Management required or a bit of common courtesy to your fellow competitors. You insufferable, petulant, pitiful little wanker. GROW UP and show some respect.