US PGA R1: Exhausted Tiger Woods struggles to keep up with Rory McIlroy

Rory McIlroy started brightly at a major "for a change" as Tiger Woods struggled with his iron shots. 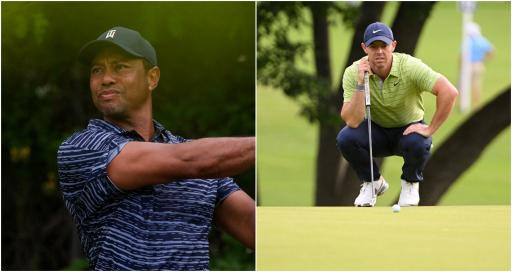 Shortly before the 2022 PGA Championship began, Rory McIlroy held his daughter Poppy in front of a mural featuring an image of her father.

"That's when Daddy used to be good," the 33-year-old said. With a few greys hairs on his head reminding us the clock is ticking, it turns out that McIlroy still is good. Still very, very good at golf.

McIlroy has made a statement to the field in the opening round of the second major of the year at Southern Hills Country Club in Oklahoma. And that statement is: "I am here, I am ready."

The Northern Irishman carded an opening round of 5-under par 65 to take the early lead. Playing alongside him was Tiger Woods and Jordan Spieth to an enormous crowd.

For both Woods and Spieth it was frustration and disappointment. Woods, 46, made the perfect start by making birdie at their starting hole at the 10th.

Another birdie followed shortly after for the big cat and it was just like old times.

At one point, Woods was inspecting Spieth's equipment and laughing and joking with both of his playing partners while feasting on a giant sandwich.

Yet Woods began to faulter. His gait began to chasten. "It was frustrating," said Woods to Sky Sports, who admitted that he had done what he needed to do early on but then he just started to "hit a lot of bad iron shots".

"It was not very good," Woods said, dripping in sweat. "Predominantly, I just hit bad iron shots, that's unfortunately what it was".

Again, more ice baths are on the menu for an exhausted Woods, who was targeting a round in the mid 60s in 24 hours time after carding an opening round of 4-over par 74.

That round contained two birdies on his front nine and two bogeys. His ugly back nine included five (!) dropped shots and one birdie at the third hole.

McIlroy's opening 65 included a blemish-free opening nine holes. He made four consecutive birdies from the 12th hole. He looked composed and calm.

Birdies at two and five propelled him to 6-under par and McIlroy fans were dreaming of a really low score.

The two lengthy par-3s almost threatened to undo all of his good work. He made bogey at the 218-yard sixth hole and again at the 249-yard eighth.

He managed to finish with a birdie for a one-stroke lead ahead of Americans Tom Hoge and Will Zalatoris.

Justin Thomas birdied the final hole to move to 3-under par.

Elsewhere, for Spieth, it was a 2-over par 72. One birdie and three bogeys were written onto the scorecard for his front nine. A bogey and a birdie followed on the way back to the clubhouse on a frustrating day.

Perhaps he will have to wait for the career grand slam?

McIlroy said he took a lot from his final day at the Masters where he finished with an incredible hole-out from the bunker at his 72nd hole. " [It is] just great to get off to a good start in a major for a change," McIlroy told Sky Sports.

"I came in here knowing that my game was in good shape, it's just a matter of going out there and executing and not getting ahead of myself. It's a great start."