Bryson DeChambeau is no longer a Bridgestone staff player after he signed up to LIV Golf, according to a report. 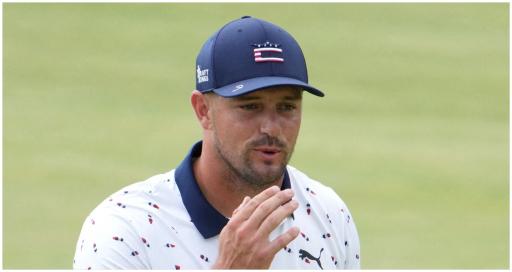 Bryson DeChambeau is no longer a Bridgestone staff player after he signed a multi-year contract with LIV Golf, according to a report by Golf Digest.

DeChambeau, 29, will make his first start in an Open Championship at St. Andrews playing alongside former champion John Daly and Cameron Tringale at 7.52am on Thursday.

According to the report, DeChambeau will still be using Bridgestone’s Tour B X Ball at the Old Course but is no longer one of the company’s staffers.

They claim a company source “with knowledge” of the situation suggests the parting of the ways was “amicable” after the eight-time PGA Tour winner and 2020 U.S. Open champion signed for LIV Golf.

The PGA Tour believe LIV Golf is direct threat to the status quo in golf. Bridgestone have been a longtime partner and tournament sponsor.

Their biggest star name, of course, is 15-time major champion Tiger Woods. Speaking ahead of the 150th Open, Woods delivered a scathing verdict of the Saudi-backed league.

Woods said players like DeChambeau have “turned their backs” on what has given them superstardom. “I just don’t understand it,” Woods said.

DeChambeau signed for Bridgestone when he turned professional in April 2016. He signed a new contract with the company in April 2020 and later went on to win his first major at Winged Foot.

The publication reports that DeChambeau will continue playing Bridgestone’s balls for the immediate future and possibly beyond his six-year affiliation.

He has previously spoken about how he feels at home with Bridgestone because of their commitment to the science and technology in developing golf balls.

In 2018, DeChambeau turned heads when he spoke about growing up soaking his golf balls in Epsom salt to determine the centre of gravity.

DeChambeau would also spray water on his golf balls during practice sessions to determine how it affected spin rate.

Such was his relationship with Bridgestone, the PGA Tour official website previously reported that he had a direct line to their research and development team.

This week, LIV Golf has still remained a talking point.

Justin Thomas is fed up of talking about it, while Rory McIlroy admitted it was “the right decision” LIV Golf chief executive Greg Norman wasn’t invited to the champions’ dinner by the R&A.

Jack Nicklaus also said he does not see “eye-to-eye” with Norman, though he counts him as a friend.

No LIV Golf player has been listed for media interviews by the R&A this week.

Next page: JT on LIV Golf, Tiger Woods and his Open chances