Player blasts new LIV signing Cam Smith: "Now what future does he have?!"

Gary Player has expressed his shock at Cameron Smith joining the LIV Golf Tour, asking how he could call himself a champion by playing 54-hole events. 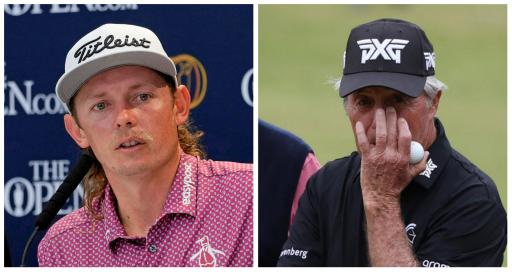 Gary Player has surprisingly taken aim at new LIV Golf Tour signing Cameron Smith, who confirmed his long-assumed intentions to join the Saudi-financed league in a deal worth $140m deal this week.

His comments might raise eyebrows because Player, 86, is a Golf Saudi ambassador. The nine-time major champ has spoken to BBC Radio 5 Live where he explained that he was "shocked" to see 28-year-old Smith join the LIV Golf Tour ahead of the fourth tournament of their inaugural eight-event season in Boston at The International.

Player, who is embroiled in a bizarre dispute with his son, turned heads earlier in the year when he claimed players wanting to join LIV "need the money". He also expressed solidarity with the Saudis, explaining that "they are our allies" as he defended the likes of Phil Mickelson.

Now Player claims that Smith has been given the wrong advice by his team. He went as far as asking how Smith could consider calling himself a champion by playing 54-hole events with no cut.

"I was absolutely shocked to hear [about] Cameron Smith," Player told the radio station.

"Here's a young man that I really thought was going to be a superstar. Now, what sort of future does he have? Will he be allowed to play in majors in the future? Will he be able to realise this great dream of being a champion? I don't know."

He added: "I've played golf all my life and I wouldn't take a billion dollars for my nine majors on both Tours. [I am] The only man to win the Grand Slam on both Tours and 165 tournaments. I worked hard. I had a desire. I travelled the world, it was an education. I met wonderful people. How can you ever be a champion playing 54 holes with no cut?"

Player also made it clear that he has no issues with those opting to play for LIV Golf. He said players like Henrik Stenson, who relinquished his Ryder Cup Europe captaincy by joining the fledgling circuit, "can't win on the regular Tour anymore."

"I don't blame Stenson for going. He had no money, so he had to go," Player said. "This superstar [Cameron Smith], I think his advisors have given him the wrong advice. I don't blame players for going on the LIV Tour. Most of the players can't win on the regular Tour anymore. The PGA Tour will always be the major Tour."

Lahiri claimed that "loneliness" was a big reason as to why he decided to leave the PGA Tour, contrasting with the concession from Varner that the financial opportunity was simply too good to pass up.

"You're opinion of me may have changed because of this announcement," Varner said in a statement. "No lie, that'll be a tough thing to deal with. But I haven't changed. I'm still me. I promise you that."

More: Why Hideki Matsuyama turned down a mind-boggling offer from LIV

The Open champion said his decision to join LIV was of course influenced by the money. A phone call from Greg Norman may have also persuaded him.

"The biggest thing for me joining is [LIV's] schedule is really appealing," he told Golf Digest.

"I'll be able to spend more time at home in Australia and maybe have an event down there, as well. I haven't been able to do that, and to get that part of my life back was really appealing.

"I've lived over here seven years now, and I love living in the U.S., but just little things like missing friends' weddings, birthday parties and seeing your mates having a great time at rugby league games has been tough."

Next page: Norman's call to Smith after The Open sealed $140m deal