Greg Norman told Today's Golfer that he doesn't pay attention to the views of Tiger Woods and Rory McIlroy who want the Australian to leave his CEO role at LIV Golf. 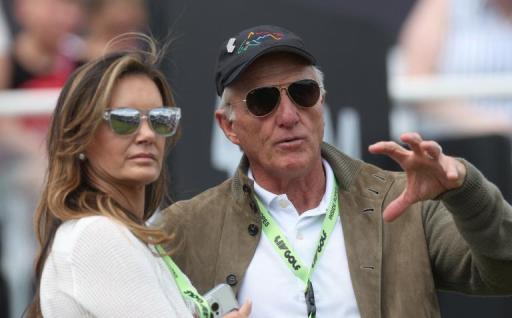 LIV Golf CEO Greg Norman has reaffirmed his position with the rebel league, insisting he isn't leaving his role despite strong calls from Tiger Woods and Rory McIlroy to resign.

In an interview with Today's Golfer, Norman said he hasn't listened to the views of Woods and McIlroy who have been instrumental in the wholesale changes made to the PGA Tour schedule for the 2023 season.

Before the Hero World Challenge last week, Woods said the litigation from LIV Golf and the counter lawsuit from the PGA Tour need to be "stayed" and Norman must leave before any degree of cooperation can take place.

During the DP World Tour Championship, McIlroy said that the two-time major champion should "exit stage left" and "nobody is going to talk unless there is an adult in the room."

In early November, The Telegraph reported that Norman could be replaced by former TaylorMade CEO Mark King, but these rumours were denied by LIV Golf Managing Director Majed Al-Sorour.

Norman, 67, rated the breakaway league's first season 9.5 out of 10. It managed to acquire Dustin Johnson, Cameron Smith, Brooks Koepka and Bryson DeChambeau and paid out $25 million in prize money at each of the first seven events, with $50 million on offer at the team finale in Miami.

"I pay zero attention to McIlroy and Woods, right? They have their agenda for whatever reason. They’re saying whatever they want to say. It has no bearing or effect on me. I’m going to be with LIV for a long, long period of time," Norman said.
"When the monopolist’s territory is getting threatened, they’re going to rear their ugly head up and do what they do. But from my whole perspective, I’ve always taken the high road this year.
"I will continue to take the high road because I believe in our business model. I believe in our people, I believe in the players’ independent rights, and we’ve already seen a dramatic shift in our audience.
"I’ve got the support of our investors. Our ambitions going forward I can tell you are pretty significant and elevated from where we are in 2022," he added.
"Of course, it can happen under my leadership (OWGR points, major exemptions, legal compromise). I mean, Tiger might be a messenger, right? Who knows. All I know is we are going to keep doing what we’re doing with LIV and we are just going to keep moving forward.
"I am not going anywhere. I don’t care what anybody says. I’m not going anywhere. I am so proud of the position I am in and maybe, maybe, it’s my leadership that has them scared. Maybe..."

Last week, it was revealed that 60 players will compete across six different countries in LIV Golf's revamped new season in 2023. Mayakoba will host in February, Singapore in April and most significantly, Valderrama in Spain at the end of June.

The event at El Cameleon in Mexico, a course which has hosted what is now the World Wide Technology Championship since 2007, is set to be the first event of LIV Golf's second season.

There have been no further player announcements by the Saudi-financed series, but some of their current players have leapt to the defence of Norman amid the calls to replace him.

Australian PGA champion Cameron Smith maintained that Norman has full belief in LIV Golf, despite coming across as a "little bit abrasive."

Sergio Garcia questioned if PGA Tour commissioner Jay Monahan should step down too, claiming it "seems that there are only bad guys on one side."