Rich Beem also bluntly identified money as the reason for Phil Mickelson flirting with the LIV Golf Invitational Series ahead of the PGA Championship. 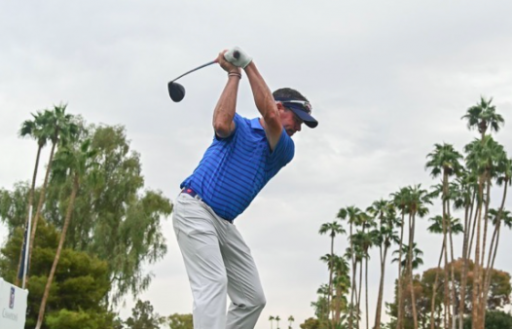 Former US PGA champion Rich Beem told GolfMagic that he doesn't trust Alan Shipnuck, the author of Phil Mickelson's upcoming biography, and said he doesn't want anything to do with him.

Beem revealed that he was unhappy with the lack of profit he personally made on Shipnuck's book "Bud, Sweat & Tees: Walk on the Wild Side of the PGA Tour," which was published around the time of Beem's sole major win in 2002.

The book documented Beemer and his caddie Steve Duplantis during his rookie year on the PGA Tour, however, the popular Sky Sports Golf broadcaster criticised the "sensationalism" of Shipnuck's work.

Shipnuck hit headlines in February when he exposed Phil Mickelson's strong language regarding Saudi Arabia and the alleged atrocities they have committed. Mickelson later claimed these comments were made off the record.

"I think a lot of it has to do with the author of it all. I'm not a fan," Beem said speaking to GolfMagic and BoyleSports Golf Betting.

"Even though he wrote that book, just so you know, you and I got paid the same amount for that book. After he wrote the book, we remained fairly friendly and then it got to the point where I'd had enough of the sensationalism of how he wrote it.

Related: Lehman: Phil Mickelson was gambling (in the woods) during Presidents Cup

"I don't trust him and if I don't trust you, then I don't really want to have anything to do with you. I think the one thing I base my friendships on and on who I want to talk to is 'do I trust them?' I don't trust Alan. It's nothing personal, I just don't trust what he writes.

"I think that he tries to sensationalist everything, but that's just my personal opinion. Some folks love what he has to say, so it's all good."

Beem, 51, expressed his surprise that it took until May 13 for Mickelson to withdraw from the PGA Championship, the tournament that Lefty won in 2021 to become the sport's oldest ever major winner.

Mickelson hasn't played on the PGA Tour since January and he continues his exile from the professional game after his collusion with the Saudis in forming what is now the LIV Golf Invitational Series.

Seth Waugh, the CEO of the PGA of America, revealed that having spoken to Mickelson, he wanted the week at the PGA Championship to be about golf and not for Southern Hills to become a circus.

Beem admitted that he wouldn't like to see the six-time major champion play in the first LIV Golf event in June, putting money down as the main object of his participation.

"I was surprised he (Mickelson) was even on the list. I was surprised it got as close as it did. If you look at everything surrounding Phil, and especially with that book coming out, I think that's a pretty damning book and I think that anybody wouldn't want to be around," Beed added.

"It's not going to disappear - I was surprised to see him commit to it (the US PGA). When he stepped away from the game for personal reasons, you need to make sure that you get everything sorted out on your planet before you come back to play golf.

"This isn't a place to come and get away from it all, especially if you're Phil Mickelson, because the media is just going to roast him and ask him some pretty hard questions and he's going to have to produce some pretty tough answers.

"I don't know when he'll be back and I'll be honest, I really hope it's not over at Centurion for the first LIV Golf Series event. If it is, then that's the path that he chooses.

"The PGA Tour has been really good to him over the years. If he decides to go down the LIV Series route then that's what he chooses. But I don't think coming back to a major championship and having to face the press about everything that's gone on would've been a great move in the first place.

"If he is truly going there (Centurion), let's face it it's for the money. There's no reason why anyone who has accomplished what he has in the game should have to go there, unless he either needs or wants the money.

"I don't get it, but if that's where he's going to go and hang his hat, then I wish him the best of luck and we probably won't see him play for a while. Who knows when we'll see him play next, whether it be a US Open or an Open Championship."

Next Page: "Awful I did nothing": Tiger Woods "STRONGER" after post-Masters misery