Ian Poulter and Graeme McDowell are the latest to run into sponsorship issues over their involvement with LIV Golf. 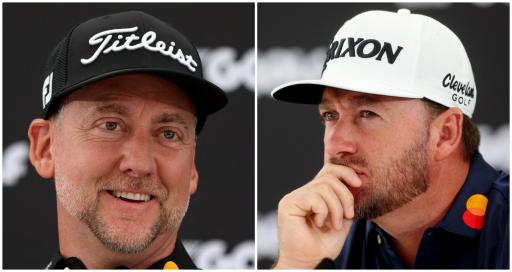 Ian Poulter and Graeme McDowell have become the latest LIV Golf players to run into issues over sponsorships due to their association with the Saudi-backed league.

Mastercard have “paused its activations” around their longtime ambassadors following their decision to join LIV Golf. They are both said to be paid millions in signing-on fees.

The news was first reported by Sports Business Journal. Neither Poulter, 46, or McDowell, 42, have responded. The decision is reported to be “recognizing uncertainties around their standing.”

Seth Eisen, Mastercard’s vice president of communications, said in a statement to the publication: “We appreciate the role they have played as ambassadors for Mastercard and the Tour for the past several years.”

Poulter and McDowell, both players who have contributed massively to Ryder Cup Europe over the years, began their relationships with Mastercard in 2009 and 2011 respectively.

Englishman Poulter took legal action last week after he was fined £100,000 and banned from three events that are co-sanctioned by the PGA Tour and DP World Tour.

A judge granted him a stay in proceedings, allowing the decision to be reviewed at a later date and paving the way for him to compete at the Genesis Scottish Open alongside fellow LIV Golf players Adrian Otageui, Branden Grace and Justin Harding.

All of those players played together in two-balls in an apparent, deliberate move by the DP World Tour to keep them separate from the field.

Harding admitted that it got a bit awkward after he found himself in contention after the first round.

It has reportedly got a bit heated at times on the range between the LIV Golf defectors and those that are staying. Sergio Garcia reportedly was so furious that he was fined and suspended that he went into an expletive-laden rant at the BMW International in Germany.

Poulter ultimately suffered humiliation in Scotland after missing the cut and finished at 10-over par having shot rounds of 78-72. It left him finishing 138th in the 160-man field at The Renaissance Club.

Speaking ahead of the tournament, he said he “didn’t have a choice” but to take legal action. “I had to appeal,” he said. I’m not going to sit back when I feel it’s slightly unjust. It was the right thing to do.”

Read his latest thoughts here after he gave a wide-ranging interview about the LIV Golf drama.

Next page: McIlroy says there's "no room for LIV Golf" ahead of The Open