Rory Mcllroy on Greg Norman: "I'm going to make it my business now to be as much of a pain in his a**e as possible." 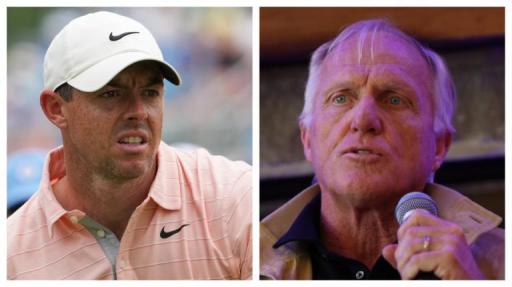 Rory McIlroy has revealed how he wanted to become "as much of a pain in the a**e" as possible for LIV Golf CEO Greg Norman ever since the Australian called him "brainwashed" by the PGA Tour.

McIlroy made his latest remarks about Norman in an interview with Irish Independent.

The World No.1 has been a strong critic of the new Saudi-bankrolled circuit ever since its inauguration in the summer, but he has somewhat recently taken his foot off the gas in the sense he now hopes "compromise" can happen between both global Tours.

One thing lead PGA Tour ambassador McIlroy has not stopped pursuing though, is getting Norman forced out of LIV Golf in order for peace talks to happen with PGA Tour commissioner Jay Monahan.

As it stands right now, there is a huge divide in the world of golf with many of the world's best golfers playing on different Tours.

McIlroy made his true feelings about Norman known in an interview with the Irish Independent this week.

"I thought, "You know what? I'm going to make it my business now to be as much of a pain in his a**e as possible," said McIlroy, speaking about the time when Norman said he was "brainwashed" by the PGA Tour.

McIlroy then told the Irish Independent how there was a brief moment of a peace offering with Norman after he watched a documentary on the Great White Shark's infamous collapse when he lost out to Sir Nick Faldo at the 1996 Masters.

"Hopefully it reminds everyone of what a great golfer you were," the text read from McIlroy.

McIlroy then recalls how Norman sent a similarly kind-hearted message to him after his own epic collapse in the same tournament 11 years ago.

"He was great," McIlroy said. "So I said to him, ''Watching it reminded me of how you reached out to me in 2011, and I just want to say that I'll always appreciate it. It meant a lot. I know our opinion on the game of golf right now is very different, but I just wanted you to know that and wish you all the best."

Norman came back with a reply straightaway: "I really think golf can be a force for good around the world... I know our opinions are not aligned but I'm just trying to create more opportunities for every golfer around the world."

"Then, a couple of weeks later, he does an interview with The Washington Post and says I've been brainwashed by the PGA Tour.

"We've had this really nice back-and-forth and he says that about me."

McIlroy has now had enough of Norman in his role as LIV Golf CEO.

The Ulsterman made those feelings very clear when calling for him to be axed during his press conference at the DP World Tour Championship.

"I think if they had found someone less polarizing [than Norman], LIV could have made more inroads," McIlroy added.

Tiger Woods has since echoed McIlroy's comments about Norman at this week's Hero World Challenge.

Woods said: "I think Greg has to go, first of all, and then obviously litigation against us and then our countersuit against them, those would then have to be at a stay as well. So then we can talk, we can all talk freely."

But in an interview with Today's Golfer this week, Norman confirmed he is not going anywhere anytime soon.

Norman told TG: "I pay zero attention to McIlroy and Woods, right? They have their agenda for whatever reason. They’re saying whatever they want to say. It has no bearing or effect on me. I’m going to be with LIV for a long, long period of time."

Earlier this week, all 14 venues for the new LIV Golf League were leaked on social media.

United States will take nine of the 14 tournaments, with the remainder being staged in England, Spain, Australia, Singapore and Mexico.